This is LSD attached to a brain cell serotonin receptor 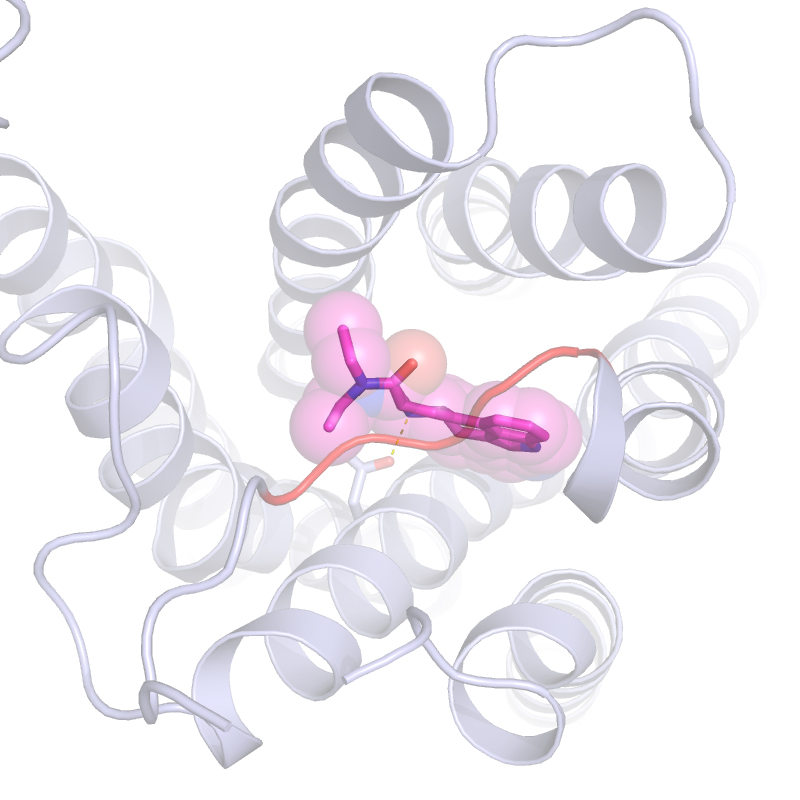 Center: a molecule of LSD bound to a larger serotonin receptor. The ‘lid’ that keeps LSD bound so long is the orange bar running through the center. Credit: Lab of Bryan Roth, UNC School of Medicine.

A tiny tab of acid on the tongue. A daylong trip through hallucinations and assorted other psychedelic experiences. For the first time, researchers at the UNC School of Medicine have discovered precisely what the drug lysergic acid diethylamide (LSD) looks like in its active state when attached to a human serotonin receptor of a brain cell, and their first-ever crystal structure revealed a major clue for why the psychoactive effects of LSD last so long.

Bryan L. Roth, MD, PhD, the Michael Hooker Distinguished Professor of Protein Therapeutics and Translational Proteomics in the UNC School of Medicine, led the research, which was published in Cell.

“There are different levels of understanding for how drugs like LSD work,” Roth said. “The most fundamental level is to find out how the drug binds to a receptor on a cell. The only way to do that is to solve the structure. And to do that, you need x-ray crystallography, the gold standard.”

That is what Roth’s lab accomplished—essentially “freezing” LSD attached to a receptor so his team could capture crystallography images. As it turns out, when LSD latches onto a brain cell’s serotonin receptor, the LSD molecule is locked into place because part of the receptor folds over the drug molecule, like a lid. And then it stays put.

“We think this lid is likely why the effects of LSD can last so long,” said Roth, who holds a joint appointment at the UNC Eshelman School of Pharmacy. “LSD takes a long time to get onto the receptor, and then once it’s on, it doesn’t come off. And the reason is this lid.”

Eventually, though, an acid trip ends. Some LSD molecules pop off their receptors as the lid moves around. Also, brain cells eventually respond to this strange molecule by sucking the receptor into the cell, where it – along with the LSD—is degraded or disassembled for recycling.

Postdoctoral researchers Daniel Wacker, PhD, and Sheng Wang, PhD, led the experiments to crystallize LSD bound to a serotonin receptor and discover why it stays bound so long. “Serotonin, obviously, hits this receptor on brain cells,” Wacker said. “But our experiments show that serotonin does not interact with this lid in the same way LSD does.” 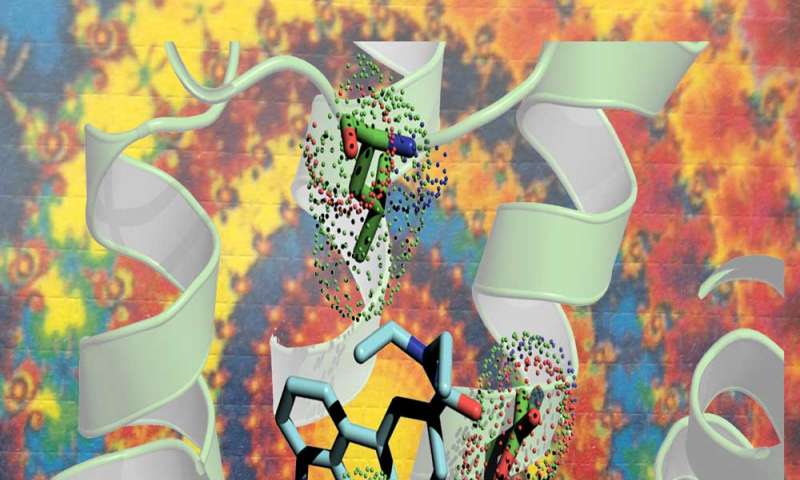 Although other labs have reported that LSD “washes” out of the brain’s fluid within four hours, such experiments could not determine what was happening on or inside brain cells. Roth’s lab has shown for the first time that LSD is very much not washed out of the serotonin receptors located within the membrane of brain cells in a few hours.

How this popular drug causes such powerful effects has remained a mystery ever since Swiss scientist Albert Hofmann first accidently synthesized and dosed LSD to report its effects in 1938. Now, because of the work of Roth’s lab, scientists can begin to parse how the drug sparks such a dramatic reaction in the brain, just as the scientific and medical communities renew interest in the drug as a potential treatment for a number of conditions, such as cluster headaches, substance abuse, and anxiety associated with life-threatening conditions.

Solving the structure of LSD could help drug developers design better psychiatric drugs with fewer side effects. Also, although LSD is illegal, it remains a popular recreational drug and not just for its most potent effects. Some people – most notably technology developers in Silicon Valley and elsewhere – report “microdosing” LSD to boost creativity, relieve stress, and help them solve problems, while avoiding its hallucinogenic effects.

One in 10 people in the United States—tens of millions of people—have reported using LSD at least once in their lives. “About 3 percent of all high school students—who are at an age when their brains are still developing—have reported trying it,” Roth said. “And although the drug has been used for a long time, we don’t know that much about it.” 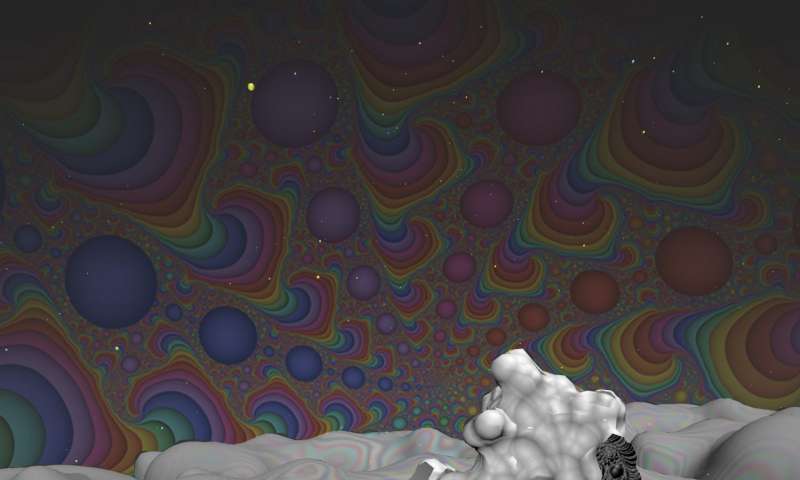 Previous to becoming a pharmacology professor and researcher, Roth was a psychiatrist specializing in schizophrenia. Patients would occasionally report that their first schizophrenic break occurred while on LSD.

“They were never the same again,” Roth said. “Although this is rare, it has been reported. People also report flashbacks and LSD is an extremely potent drug. So for those reasons, along with its potential as part of therapeutic treatment, LSD is scientifically interesting.”

For two decades, Roth’s lab—first at Case Western Research University and then upon his arrival at UNC in 2005 – had been trying to crystalize LSD attached to its receptor through a series of tedious and unsuccessful experiments. Others, too, have been trying. Without crystals, no one would be able to see what LSD bound to a receptor would look like.

“To get crystals of a known compound bound to its receptor is incredibly difficult,” said Roth, who is also director of the National Institute of Mental Health’s Psychoactive Drug Screening Program housed at UNC. “In some cases, it’s nearly impossible.”

For the past several years under Roth’s guidance, the task fell to Wacker, who was the first scientist to determine the crystal structure of a serotonin receptor. That was nearly four years ago as a graduate student in the lab of Ray Stevens, PhD, formerly at the Scripps Institute.

There are a few reasons why crystallizing LSD bound to a receptor is difficult. The first is lack of material; the receptors need to be produced in the lab using a number of tricks such as generating a virus that than infects cells and generates the receptor. Second, the receptors are incredibly flexible, even when compounds such as LSD are bound to them; the receptors do not want to sit still. Third, unlike, say, a molecule of water, a serotonin receptor is highly complex and composed of thousands of atoms.

Wacker explained: “We need a lot of receptors to generate an image because of their small size – much smaller than the wavelength of visible light. Instead we use x-rays, but for that to work we need all of these receptors to sit perfectly still, and they all need to sit still in the same exact way, and that’s what happens in crystals. So, even if you create a lot of serotonin receptors and attempt to crystallize them, one receptor might twitch in one direction, another receptor might twitch in another direction, a third receptor might not be bound to the LSD, and a fourth receptor might have a lid that moves a little more than the other receptors. So, we need to dissolve all these receptors in water and then slowly take away the water. The temperature needs to be just right. And then we need to employ all kinds of experimental tricks to continue to draw out the water and convince the molecules to sit still so that they will want to crystallize.”

It’s sort of like letting soup sit out overnight, Wacker said. You’ll notice salt crystals at the bottom. That’s because the salt in the soup is dissolved in water, but then as water slowly evaporated over time, salt molecules latch onto each other to stay stable. The result: crystals.

Then UNC postdoctoral researcher John McCorvy, PhD, discovered that the lid was the key to LSD being bound to its serotonin receptor. McCorvy and colleagues created mutant receptors with floppier lids, and they found that LSD bound more quickly and also detached from the receptor more easily. They also noticed that the shorter binding times led to different signaling patterns inside cells. These different patterns likely means that the effects of LSD would have been different than the typical effects with the lid tightly secured.

Ron Dror, PhD, and his team at Stanford used computer simulations to confirm that this is what might happen when LSD engages its receptor protein in a human brain. 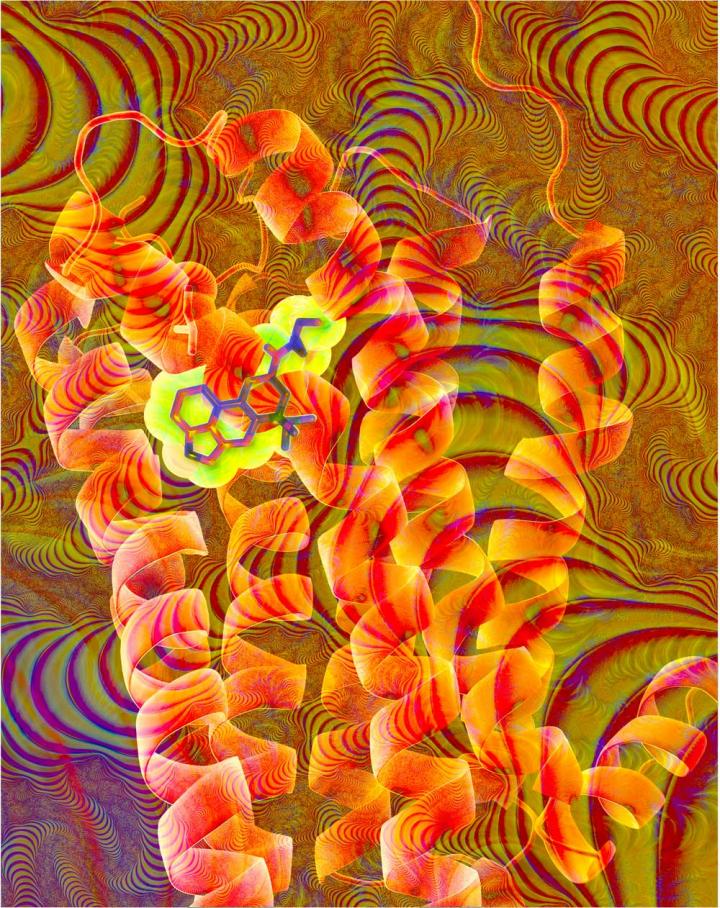 Artistic representation of the chemical structure of LSD — highlighted in yellow — interlocking into a red-orange ribbon diagram of the serotonin receptor. Credit: Annie Spikes.

Another aspect of this computational work focused on the fact that the receptor site is not static—the receptor and the drug are both highly dynamic. “They wiggle around all the time, Dror said. “It has long been observed that LSD trips are long. The simulations helped explain why the receptor holds onto LSD for so long despite the fact that they have such a dynamic connection.”

Roth said, “We do not advocate using LSD; it is potentially very dangerous. But it could have potential medicinal uses, some of which were reported in the medical literature decades ago. Now that we’ve solved the structure of LSD bound to a receptor, we are learning what makes it so potent.”

Wacker added, “I think it’s important for the pharmaceutical industry to understand that if you modify just one tiny aspect of any compound, you might affect the way it sits in the receptor. And as a result, you might affect how the compound works.”