Bohemian Grove is a 2,700-acre (1,100 ha) campground located at 20601 Bohemian Avenue, in Monte Rio, CA, belonging to a private San Francisco-based men’s art club known as the Bohemian Club. In mid-July each year, Bohemian Grove hosts a two-week, three-weekend encampment of some of the most prominent men in the world. 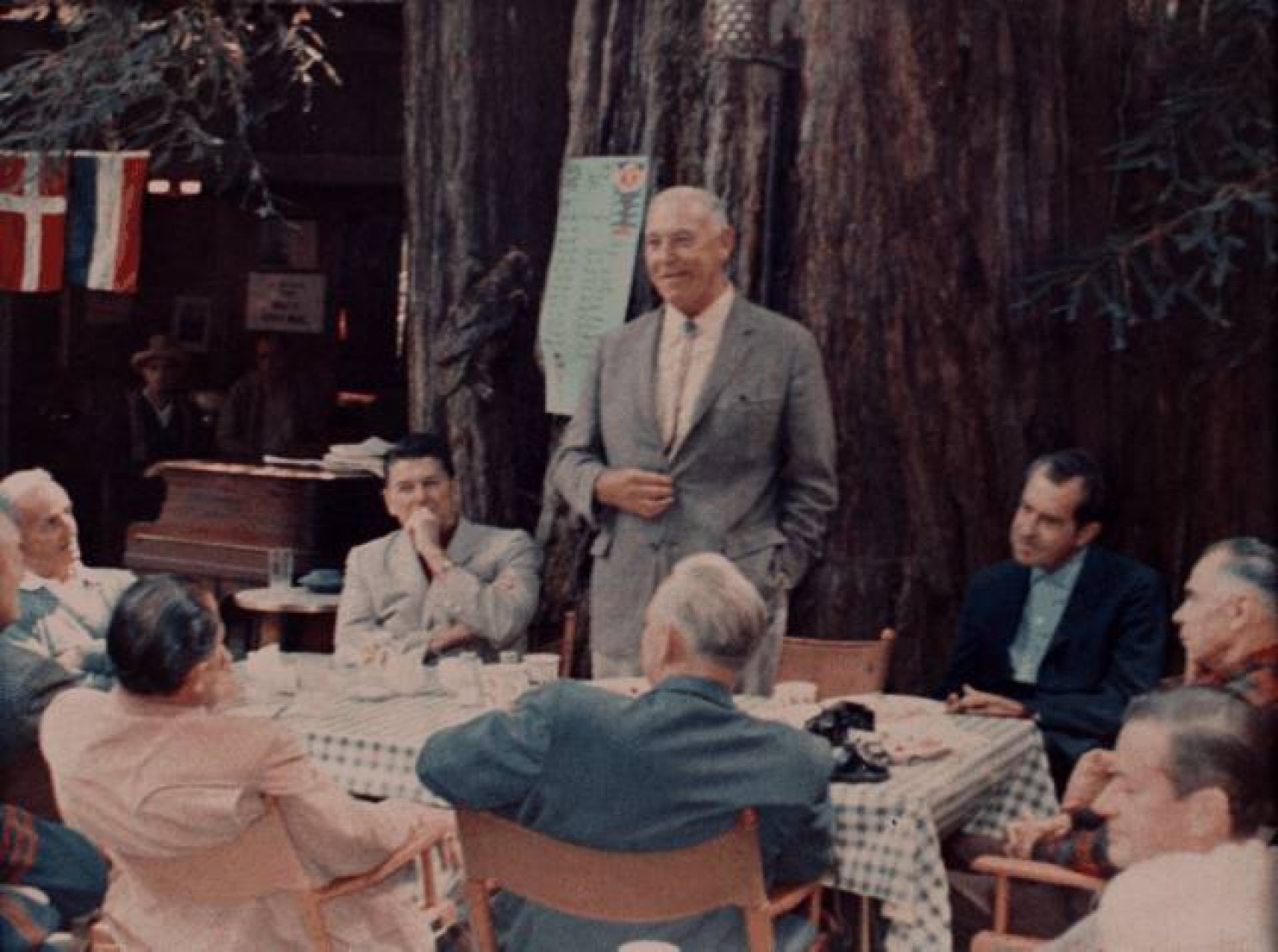 Two future U.S. presidents, Ronald Reagan and Richard Nixon, are pictured with Harvey Hancock (standing) and others at Bohemian Grove in the summer of 1967.

Every July, some of the richest and most powerful men in the world gather for two weeks of heavy drinking, super-secret talks, druid worship and other rituals.

Their purpose: to escape the “frontier culture,” or uncivilized interests, of common men.

The people that gather at Bohemian Grove — who have included prominent business leaders, former U.S. presidents, musicians, and oil barons — are told that “Weaving Spiders Come Not Here,” meaning business deals are to be left outside. One exception was in 1942, when a planning for the Manhattan Project took place at the grove, leading to the creation of the atom bomb.

A spokesperson for Bohemian Grove say the people that gather there “share a passion for the outdoors, music, and theater.”

The club is so hush-hush that little can be definitively said about it, but much of what we know today is from those who have infiltrated the camp, including Texas-based filmmaker Alex Jones. In 2000, Jones and his cameraman entered the camp with a hidden camera and were able to film a Bohemian Grove ceremony, Cremation of the Care. During the ceremony, members wear costumes and cremate a coffin effigy called “Care” before a 40-foot-owl, in deference to the surrounding Redwood trees.

Another infiltrator, Spy magazine writer Philip Weiss, posed as a guest for seven days in 1989, when the waiting list was 33 years long and the grove had several thousand members. Weiss published the article “Inside Bohemian Grove,” writing: “You know you are inside the Bohemian Grove when you come down a trail in the woods and hear piano music from amid a group of tents and then round a bend to see a man with a beer in one hand … urinating into the bushes. This is the most gloried-in ritual of the encampment, the freedom of powerful men to pee wherever they like, a right the club has invoked when trying to fight government anti-sex discrimination efforts and one curtailed only when it comes to a few popular redwoods just outside the Dining Circle.”

Former President Bill Clinton once told a heckler, “The Bohemian club! Did you say Bohemian club? That’s where all those rich Republicans go up and stand naked against redwood trees right? I’ve never been to the Bohemian club but you oughta go. It’d be good for you. You’d get some fresh air.” [Via: washingtonpost.com]