Researchers have grown premature lambs in an artificial womb

Researchers have shown it’s possible to nurture and protect lambs in late stages of gestation inside an artificial womb; technology which could become a lifesaver for many premature human babies in just a few years.

Babies born at or before 25 weeks have quite low survival outcomes, and in the US it is the leading cause of infant mortality and morbidity.

“Just looking at them it’s immediately clear that they shouldn’t be here yet, they’re not ready,” said Emily Partridge, a doctor for critically premature infants at the Children’s Hospital of Philadelphia (CHOP) and one of the researchers.

With an artificial womb the babies can continue developing – even just a few weeks extra ‘growing time’ can be the difference between severe health problems and a relatively healthy baby.

“These infants have an urgent need for a bridge between the mother’s womb and the outside world,” says Alan Flake, senior researcher for the study and a foetal surgeon at the CHOP.

“If we can develop an extra-uterine system to support growth and organ maturation for only a few weeks, we can dramatically improve outcomes for extremely premature babies.”

The researchers took eight lambs between 105 to 120 days gestation (the physiological equivalent of 23 to 24 weeks in humans) and placed them inside the artificial womb.

The womb itself, a sealed and sterile bag, is filled with an electrolyte solution which acts like amniotic fluid in the uterus. The lamb’s own heart pumps the blood through the umbilical cord into a gas exchange machine outside the bag.

This diagram below gives you some idea of how it works. 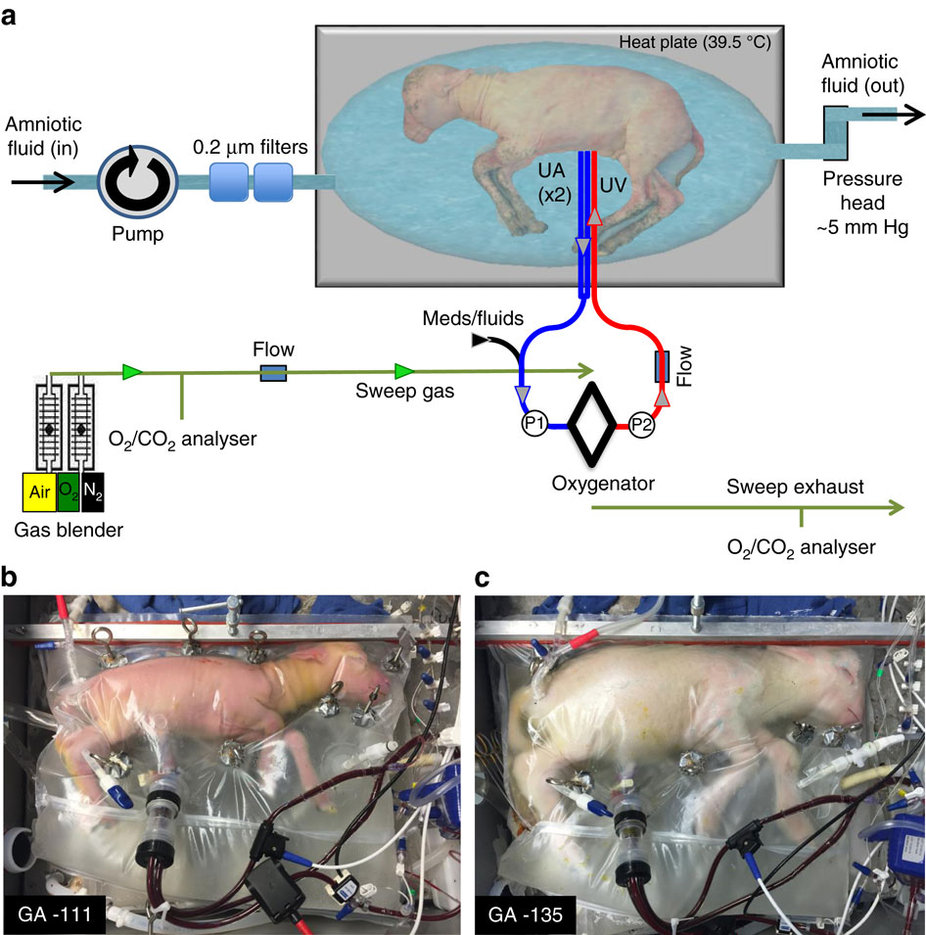 And at least on the lambs in this study, the artificial womb worked – after just four weeks the lambs’ brains and lungs had matured. They had also grown wool and could wiggle, open their eyes, and swallow.

“We’ve been extremely successful in replacing the conditions in the womb in our lamb model,” said Flake to Rob Stein at NPR.

Although this study is looking incredibly promising, we can’t get too excited just yet. Getting the research up to scratch for human babies is still a big leap.

As Olga Khazan explains for The Atlantic:

“Artificial uteruses have been tried – and failed – before. A 1996 New York Times Magazine story declared “the artificial womb exists” and described a Tokyo lab in which baby goats floated in a heated, fake amniotic suspension. But, alas, it all ended in technical issues and circulatory failures.”

Lamb umbilical vessels may not function the same way as human babies do – and lambs are also significantly larger than foetuses at that stage of development.

Nevertheless, if all goes well, the researchers hope to test the device on premature humans within three to five years.

And other researchers in the field are excited about the results.

“They appear to have got lambs through four weeks which is a pretty momentous achievement.”