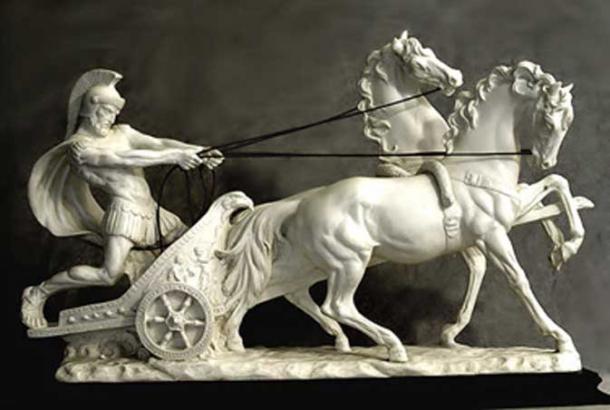 A native of Lamego, Lusitania (now Lamego, Portugal), his first notable victory outside his native land was in Ilerda (now Lleida, Spain)

This success brought him international fame and encouraged him to go to Rome.

He became known as Lamecus and henceforth brought fame and renown to Lamego, his native city. Within the city, was erected a statue on top the fountain in front of the garden known today as Jardim do Campo, located in the centre of town.

He most commonly raced four-horse chariots, and in most of his races he came from behind to win. Diocles is also notable for owning an extremely rare ducenarius, a horse that had won at least 200 races. Records show that he won 1,462 out of the 4,257 four-horse races he competed in. His winnings reportedly totaled 35,863,120 sesterces, an amount which could provide a year’s supply of grain to the entire city of Rome, or pay the Roman army at its height for a fifth of a year. Classics professor Peter Struck describes him as “the best paid athlete of all time“. [Via: wikipedia]

The best paid athlete of all time was a Lusitanian Spaniard named Gaius Appuleius Diocles, who had short stints with the Whites and Greens, before settling in for a long career with the Reds. Twenty-four years of winnings brought Diocles—likely an illiterate man whose signature move was the strong final dash—the staggering sum of 35,863,120 sesterces in prize money. The figure is recorded in a monumental inscription erected in Rome by his fellow charioteers and admirers in 146, which hails him fulsomely on his retirement at the age of “42 years, 7 months, and 23 days” as “champion of all charioteers.”

His total take home amounted to five times the earnings of the highest paid provincial governors over a similar period—enough to provide grain for the entire city of Rome for one year, or to pay all the ordinary soldiers of the Roman Army at the height of its imperial reach for a fifth of a year. By today’s standards that last figure, assuming the apt comparison is what it takes to pay the wages of the American armed forces for the same period, would cash out to about $15 billion.