Nutella: The miracle of WW2

On April 20 1964 the first jar of Nutella came out from the Ferrero factory in Alba. Its origins, however, date back to the 1940s and before. At least from the 1920s the Ferreros – Pietro first and Michele afterwards – had pursued a recipe of an inexpensive chocolate snack to be eaten with bread.

Pietro Ferrero, a pastry chef in Turin, used to watch workers go to their factories bringing bread with tomatoes and cheese for a meal. He thought that if he could give those workers something sweet and inexpensive to eat with bread, he would hit a jackpot. In Piedmont at the time there was already a kind of chocolate made with cocoa and chopped hazelnuts: the “gianduja”. Hazelnuts are abundant in Piedmont and the peasants did not even know what to do with them. In 1925 Pietro Ferrero perfected the so-called “pastone” (pastry mesh) of chocolate and hazelnuts (Nutella’s grandfather), very good to eat with bread. Of course, more than by workers, it was immediately appreciated by children, who became Ferrero’s target market. 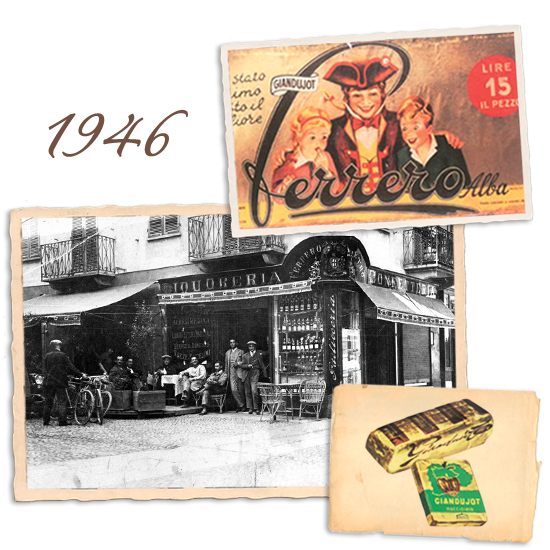 The war came, Pietro closed his shop in Turin and took refuge in Alba where he continued to work at his still too hard chocolate mixture. In the autumn of 1945 or early 1946, he found on a shelf a forgotten jar of cocoa butter. He added it to the mixture and created the Pasta Gianduja (or Giandujot), which was then packaged in the form of a small loaf, wrapped in tin foil, cut it into slices and sold at cheap prices. The ingredients were more or less those of today: sugar, hazelnuts, cocoa and vegetable fats. In stores the Giandujot cost 4-5 times less than traditional chocolate. 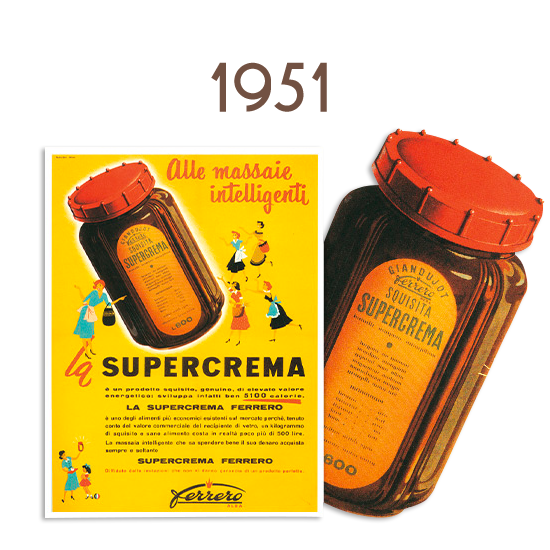 The next step came when it became spreadable. Pietro Ferrero died March 2, 1949, and was replaced by his son Michele. Legend has it that in the particularly hot summer of 1949 the gianduja melted and some retailers began to sell it as a spread cream. Another version of the legend is that the product melted in a warehouse in Alba and they were forced to transfer it into jars. Since that moment the Ferrero altered the formula making it softer and spreadable, and called it “Supercrema.”

In 1962, Italy passed a law banning names with superlatives (such as super-, ultra-, stra-) for consumer products. Ferrero had to choose a new brand name: “Nutella” registered in October 1963, came from merging the English word “nut”, from the typically Italian ingredient hazelnut in the gianduja, with the Italian positive-sounding suffix “ella”. The winning combination came with the colors: the black “N” and the other letters in red. The first jar came out on April 20, 1964, starting the Nutella era. 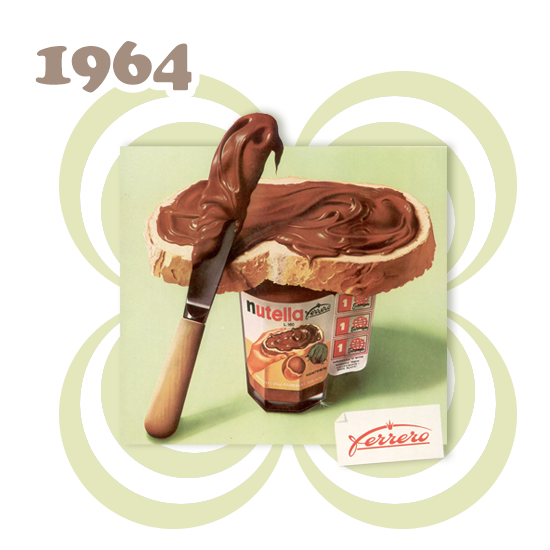 In the following years Nutella became a myth, a global phenomenon. In 1967 the legendary Carosello TV ads developed a highly sucessful campaign and Italy fell in love with Nutella. In the seventies, Nutella emigrated, and children of other countries started to appreciate Nutella as a cure for small sorrows and an antidote to depression and loneliness.How did this happen? The aura that Ferrero managed to build around this product is amazing. The uniqueness of Nutella is not due to the quality of the product, or to the quality/price ratio but to advertising. Many attempts to imitate the recipe failed miserably, not because Nutella is unreachable from the quality point of view, but because no one was able to produce something equally attractive at the same price. In the popular imagination, Nutella is now the absolute leader and all imitations are seen as inferior. The consumer is accustomed to the taste of Nutella, and wants only that, considering inferior even products with a different, but better taste.