While most fat cells in the human body store energy, everyone has a small subset of brown fat cells that do the opposite—burn energy and generate heat. Now, Salk researchers have discovered how the molecule ERRγ gives this “healthier” brown fat its energy-expending identity, making those cells ready to warm you up when you step into the cold, and potentially offering a new therapeutic target for diseases related to obesity. The paper appears in Cell Reports on March 13, 2018.

“This not only advances our understanding of how the body responds to cold, but could lead to new ways to control the amount of brown fat in the body, which has links to obesity, diabetes and fatty liver disease,” says senior author Ronald Evans, Howard Hughes Medical Institute investigator and holder of Salk’s March of Dimes Chair in Molecular and Developmental Biology.

Until about a decade ago, scientists thought that only babies—who can’t yet shiver to warm up—had brown fat in their bodies. Studies have since shown that adults also have brown fat, albeit at much lower levels, and people with lower body mass indexes (BMIs) tend to have more of it. At a cellular level, brown fat cells are crammed full of energy-generating mitochondria, which give the cells their brown color.

In the new work, Evans’ group focused on estrogen-related receptor gamma (ERRγ), a gene that is active at high levels in brown fat cells. 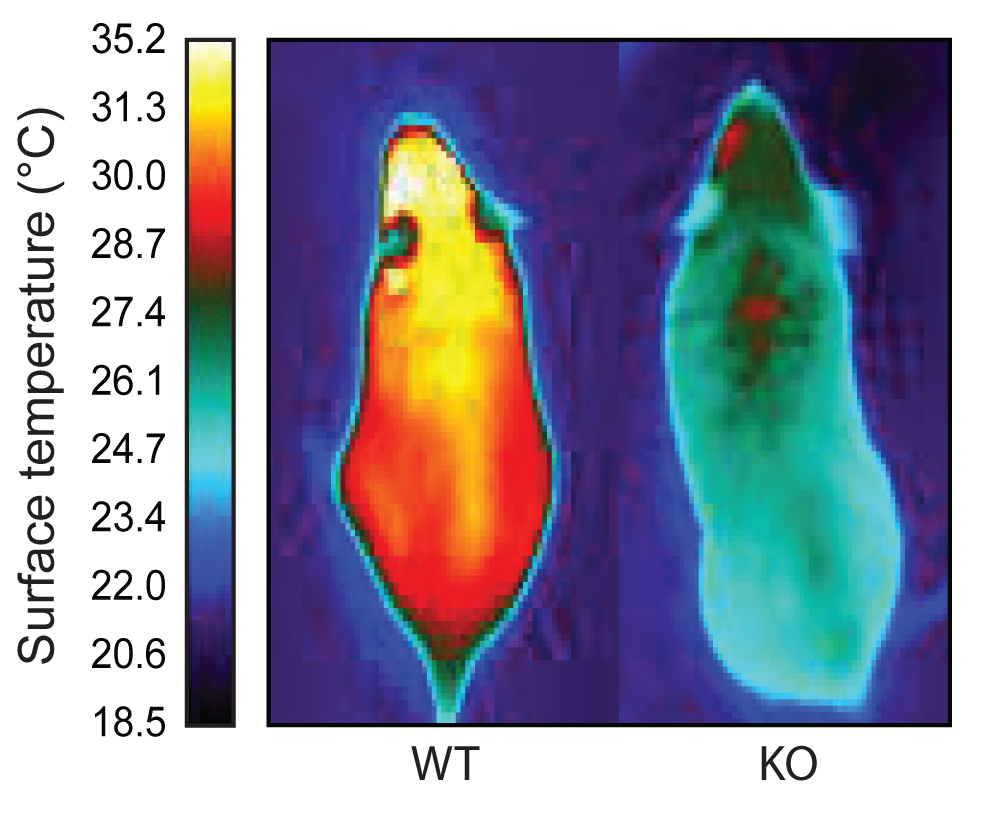 Infrared images indicate the much warmer temperatures of a normal mouse (left) compared to a mouse unable to make ERR gamma (right). Via: salk.edu

“We were interested in what maintains brown fat, even when we’re not exposed to cold all the time,” says Maryam Ahmadian, a Salk research associate and first author of the new paper.

The team found that brown fat cells express the ERRγ gene all the time (not just in response to cold) and that white fat cells do not express the gene at all. And by studying mice lacking the gene for ERRγ (and therefore unable to make the ERRy molecule), the team observed that all brown fat cells resembled white cells in these mice. Additionally, the animals were unable to maintain their body temperature when exposed to cold temperatures. While 80 percent of normal mice are able to handle a temperature drop, all mice lacking ERRγ did not tolerate the cold. However, there was no difference in the metabolism or weight of the mice. Together, the experiments reveal that ERRγ is key to helping brown fat maintain its identity and its ability to respond to cold.

Since the ERRγ gene codes for a protein that can travel into the cell nucleus and directly control the expression of other genes, the team also probed which genes were mediated by ERRγ in brown fat cells. They pinpointed a number of genes already known to be important in brown fat, but which hadn’t been specifically linked to ERRγ inthe past.

“We uncovered the factors that are both involved in protection against the cold and underpin brown fat identity,” says Michael Downes, a Salk senior scientist and co–senior author of the paper.

The group is planning future studies that look at the effect of activating ERRγ in white fat cells—which they suspect could make some white fat resemble brown fat, and potentially help treat obesity and diabetes. They also want to study whether the role of ERRγ in the brown fat of humans is the same as what they’ve observed in mice.