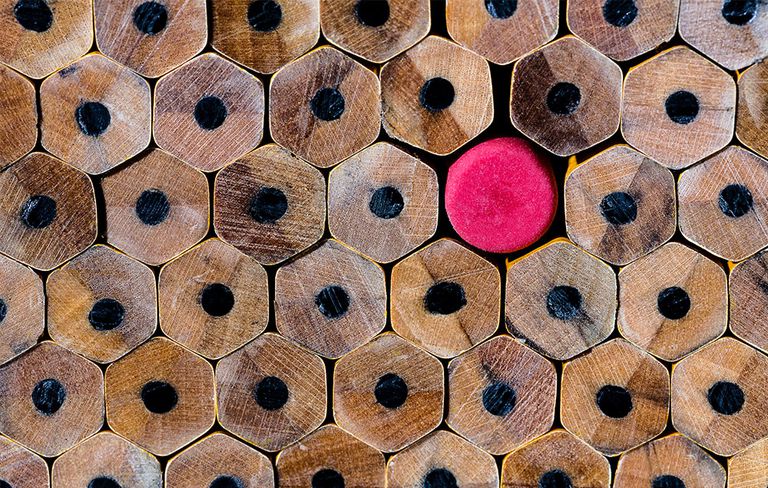 If you watched the HBO series Girls, you may remember that the lead character, Hannah Horvath, struggled with obsessive-compulsive disorder (OCD)—a condition the show’s lead actor, screenwriter, and producer, Lena Dunham, has lived with since childhood. Among the symptoms Dunham has disclosed having is an obsession with the number eight, which leaves her feeling compelled to perform such behaviors as looking from side to side eight times. She has reported taking medication on and off for her OCD, as well as receiving therapy.

Of course, many people have superstitions and rituals they feel they “need” to do in order to feel or perform optimally. Soccer star David Beckham has admitted that he has to line up cans of soft drinks or arrange items in his hotel room in a particular way, whether in pairs, in a straight line, or in some other order. Rafael Nadal, the Spanish professional tennis player, engages in several rituals before matches, including eating an energy gel in a particular way, drinking water and an energy beverage in a certain order, and lining up the bottles in a certain way.

Maybe you have a friend or coworker who says she’s “so OCD” because she keeps her closet extra organized or is fastidious about cleaning her home. But none of these behaviors alone necessarily qualifies as OCD. So at what point do obsessive thoughts and rituals cross the line from idiosyncrasies to a real disorder? The sections below will help answer that question and others you may have on this condition.

OCD is a mental disorder in which a person has uncontrollable, recurring thoughts (obsessions) or behaviors (compulsions) that he or she feels an urge to repeat over and over. Most people with OCD have both.

Common obsessions include a fear of disease or germs, an urge to organize things in a precise order or symmetrical arrangement, perverted or forbidden sexual thoughts, fear of losing control and acting on an impulse to harm someone or oneself, fear of losing things, and obsessions centered around religious scrupulosity or morality.

The obsessions and compulsions become a vicious circle, with the person performing a compulsion to reduce the anxiety caused by the obsession but getting only temporary relief; soon the obsession returns (or a new variation of it), precipitating another round of compulsions, and so on.

The thoughts that people with OCD experience actually aren’t all that unusual; most of us have weird, intrusive thoughts from time to time (say, a thought of harm coming to a loved one, or a vision of the house going up in flames because we might have forgotten to turn off the stove). The difference isn’t in the subject matter of the thoughts, but rather that someone with OCD can’t control these thoughts or the resulting behaviors, even though he or she may recognize that they are excessive, and experiences great distress because of them. The person becomes locked into a pattern of obsessions, rising anxiety, and time-consuming rituals that ultimately serve only to feed the cycle, often at a significant cost to family, professional, and social life.

How prevalent is OCD?

It’s estimated that about one in 100 adults in the U.S. has OCD in any given year, with a lifetime prevalence of about two percent. But this might underrepresent the actual incidence, because only people who have significant distress from the condition tend to seek care. More adult women have OCD than men, but among children, more boys than girls are affected. In women, the risk of OCD—including a new onset, a recurrence, or exacerbation of the condition—may be higher during pregnancy or after giving birth, though studies on this aren’t consistent.

Most people are diagnosed with OCD by age 19, with boys likely to be diagnosed earlier than girls. But it is possible to develop OCD later in life. The symptoms usually—though not always—come upon the person gradually. In 60 to 70 percent of cases, OCD is a chronic condition,though it can be managed.

How is OCD diagnosed?

A health care provider—ideally a mental health professional, but sometimes a primary care provider—can diagnose OCD using the “bible” for psychiatric conditions, the Diagnostic and Statistical Manual of Mental Disorders, now in its fifth edition (DSM-5). It documents the following key criteria to make a diagnosis of OCD:

For a full list of the DSM-5 diagnostic criteria for OCD, see Table 2 in this informative article from the American Family Physician journal.

A full assessment for OCD can be done using one of several accepted screening instruments, such as the Florida Obsessive-Compulsive Inventoryandthe Yale-Brown Obsessive Compulsive Scale. These can help determine the severity of OCD as well as what types or subtypes are present.

Multiple factorsare likelyinvolved. It’s known that OCD has a neurobiological component: People with OCD appear, based on imaging studies, to have abnormalities in certain parts of the brain, such as the anterior cingulate cortex, caudate nucleus, or medial orbitofrontal cortex. They may also have problems with various neurotransmitters, including serotonin and dopamine, that send messages between neurons. This could create a communication problem between different parts of the brain.

OCD also has a genetic component. Approximately 25 percent of people with OCD have an immediate family member (parent, child, or sibling) with the condition. The risk is higher if one of these first-degree relatives developed OCD as a child or teenager.

Cognitive and environmental factors may also play a role. On the cognitive side, for example, some researchers believe that OCD involves a faulty belief system in which the person misinterprets his or her “weird” thoughts as being very significant, leading them to become obsessed with them. Other dysfunctional thought patterns common among people with OCD include perfectionism, the belief that it’s important to control one’s thoughts, and profound difficulty dealing with uncertainty.

Interestingly, the thoughts that people with OCD experience aren’t uncommon in the general population. A study published in 2014 in the Journal of Obsessive-Compulsive and Related Disorders showed that 94 percent of all people have unwanted thoughts or impulses that are symptomatic of OCD. The difference between people with the condition and those without it is that those with OCD experience the thoughts frequently and find them distressing. So, rather than dismissing them as just silly thoughts, which is what people in the general population would do, people with OCD are profoundly concerned by them.

Some evidence suggests that OCD can be triggered by a traumatic brain injury or by a bacterial or viral infection. People who have experienced abuse or other sorts of trauma, including sexual abuse as a child, also appear to have an increased risk of the disorder.

How is OCD treated?

OCD is generally considered a chronic condition, with symptoms waxing and waning over thelife course. But aggressive and early treatment can go a long way toward helping a person manage the condition and even achieve remission, in which he or she experiences mild to no symptoms. It’s believed that the likelihood of remission is greater in people who are younger, whose symptoms have been present for only a short time, who have some recognition that their “odd” beliefs are not true, and who respond well to initial treatment.

Unfortunately, many people with OCD do not get adequate treatment. A paper published in 2010 in Molecular Psychiatry, for example, which included 2,073 people with OCD, found that only 31 percent of those with severe OCD had received treatment specifically geared toward OCD (for descriptions of the main OCD treatments, see below). Without treatment, quality of life for people with OCD is diminished, as they tend to spend a considerable amount of time obsessing and acting on their compulsions, and to avoid situations that trigger their obsessions or compulsions.

OCD is treated with medication, psychotherapy, or a combination of these. The newer class of antidepressants known as selective serotonin reuptake inhibitor (SSRIs)—including fluoxetine (Prozac), paroxetine (Paxil), and sertraline (Zoloft)—are considered the first line of medication treatment. If symptoms don’t improve, your physician may switch to other psychoactive drugs. Whatever medication is used, it’s typically continued for years, if not indefinitely.

A variety of types of psychotherapy are used in treating OCD, namely those that fall under the category of cognitive behavioral therapy (CBT). A form of CBT called Exposure and Response Prevention has been shown to reduce compulsions and is considered first-line therapy, often with the addition of medication. This therapy involves a gradual exposure to the obsession—germs, for example—during which the therapist may ask the person to touch a public doorknob and then delay washing his or hands. Over time he or she would gradually increase the delay interval.

A newer approach, Acceptance and Commitment Therapy, is also a form of CBT. The idea behind this therapy is that people can have thoughts and feelings and learn to accept them as simply things going on in their mind that are not dangerous and don’t need to have an impact on their life. Instead of acting on the thoughts or feelings, they move forward with other, healthier behaviors, such as talking with a friend, exercising, or playing with their children.

If these don’t work to control symptoms, other therapies may be used. One of these is deep brain stimulation, in which a surgical procedure is performed to implant electrodes in specific locations in the brain. Though it’s not entirely clear how it works, it may help by inhibiting hyperactivity of a specific neural network.