The LEGO minifigure is 40 today! The first minifigs as we know them first appeared in 1978. That year, 37 sets containing 40 different figures were produced: Town, Space and Trains, plus of course the classic 375 Castle.

To celebrate the occasion LEGO has issued some fun facts and dozens of interesting images of prototypes, patent diagrams and so on. 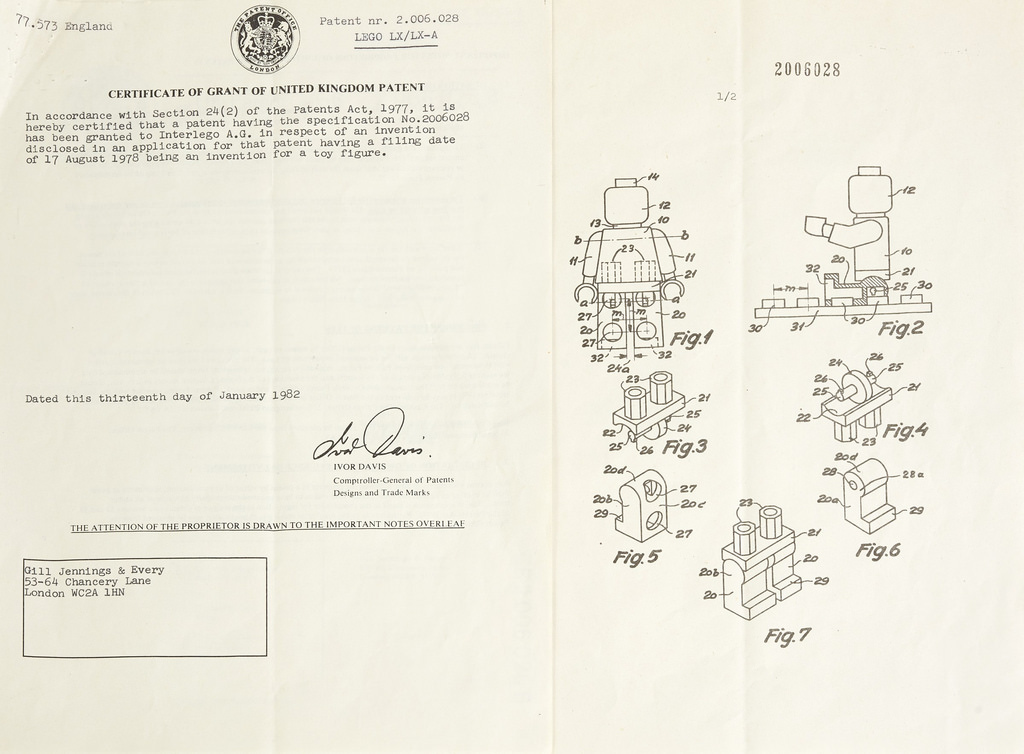 Here’s the diagram, cleaned up a bit. A PDF copy of the full US patent can be downloaded, which describes the numbered aspects of the design. 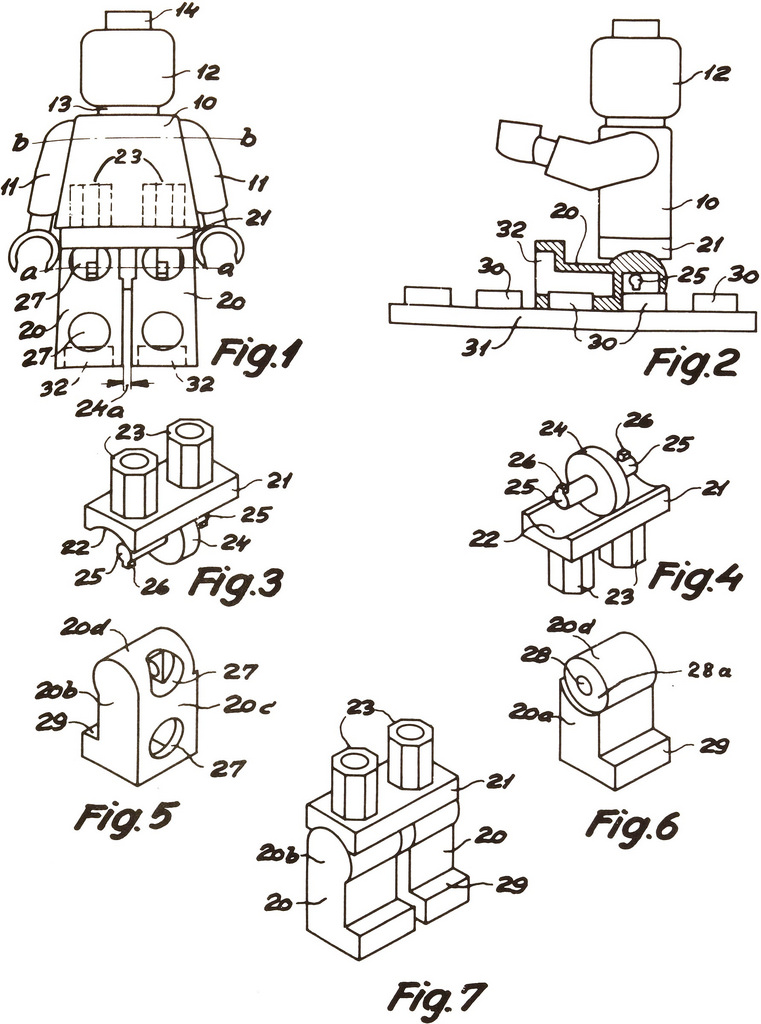 LEGO has provided the following information, and a cool infographic, about the evolution of the minifigure:

Celebrating the 40th anniversary of the LEGO minifigure

In 1978, Disco was dominating the charts, mobile phones were non-existent and the Internet was still more than a decade away. It was also the year the very first LEGO minifigures went into production. Fast forward to today and those inaugural characters have evolved nearly as much as the world around them, offering endless roleplay possibilities. 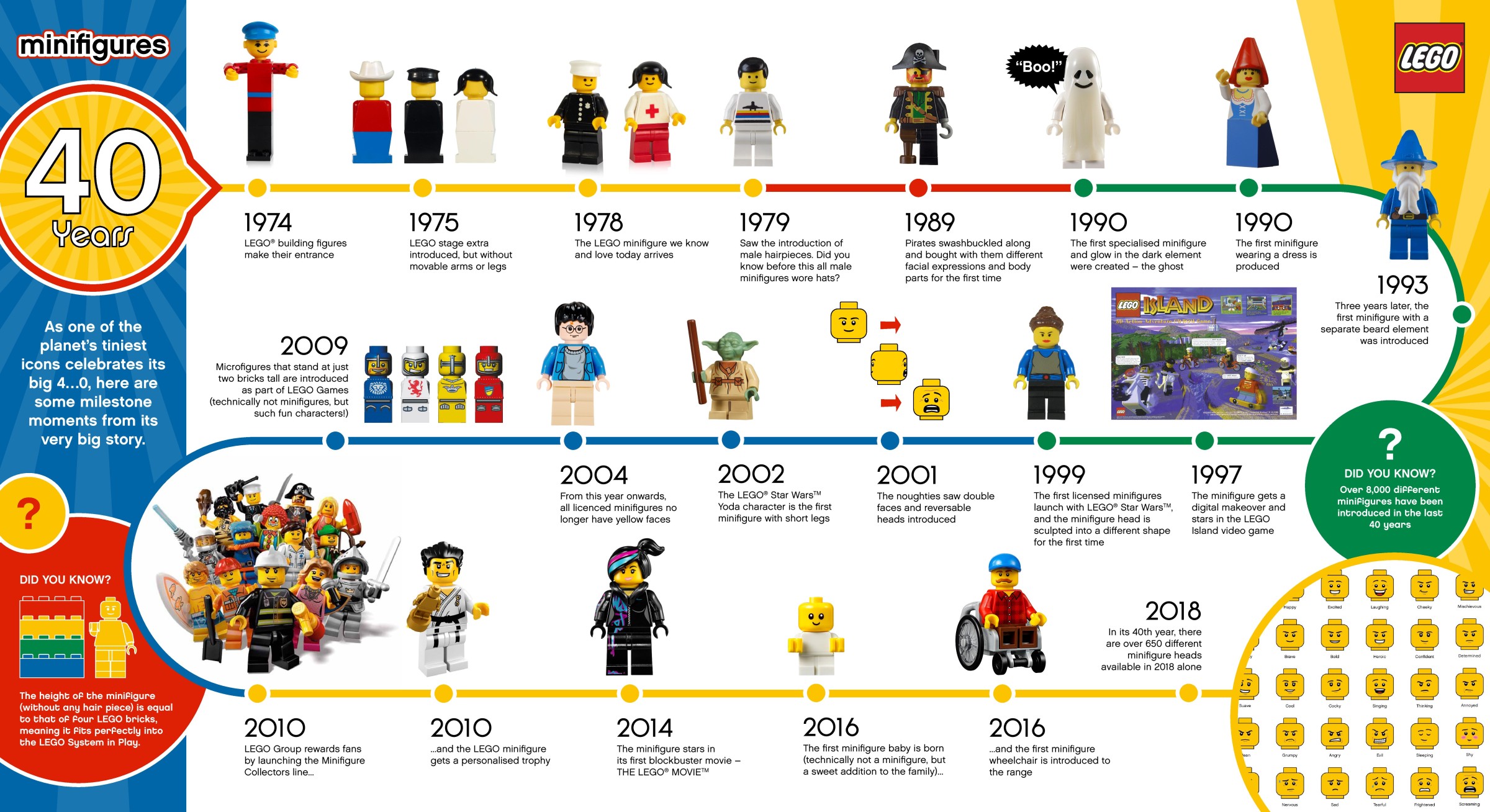 The evolution of the LEGO minifigure

It all started in 1974 when the LEGO building figure was launched, made mostly of large square LEGO bricks with moveable arms but immoveable legs. This was followed in 1975 by LEGO stage extra figures with solid torsos, immoveable arms and legs, and no printed features. Basically, very different to the LEGO minifigures we know and love today!

Not that we had to wait too long for them to arrive, with 1978 ushering in a new era of LEGO minifigures equipped with moveable limbs and simple facial expressions comprising two solid black eye dots and black painted smile.

Fast forward to 2018 and there are now more than 650 unique faces in the collection, meaning children can have fun roleplaying different characters and personalities – anytime, anywhere.

To begin with, there were around 20 different LEGO minifigure characters, including a police officer, doctor, firefighter, knight and astronaut. But in the four decades since, the number of minifigures available has risen to more than 8,000.

To put that into context, if the global population had grown at the same rate, there would now be nearly 144 trillion of us living on Earth!

Take away the hair or any other headpiece and LEGO minifigures are exactly the same height as four LEGO bricks fitted together. This means they fit perfectly into the LEGO System in Play. Oh, and if you stacked them head to toe, you would need 20,750 to reach the height of the world’s tallest building, Dubai’s Burj Khalifa.

Jack of all trades

Over the years, LEGO minifigures have shown they can turn their hand to pretty much anything. From pirates to paramedics, engineers to elephant keepers, veterinarians to Vikings, there have been thousands of different minifigure characters.

Three LEGO minifigures even blasted into space onboard NASA’s Juno spacecraft in 2011. But one thing has remained consistent throughout: whatever role, character or personality children fancy playing, there’s sure to be a minifigure to match.

Did you know the traditional yellow colour of the LEGO minifigure’s head was chosen based on focus group feedback in the early and mid-1970s saying this was preferable to white ones? Since then, minifigures have become increasingly diverse – from the first figures with natural skin tone in 2003 (Lando Calrissian from Star Wars and NBA basketball players) to 2016’s inaugural wheelchair.

LEGO minifigures have also done their bit for unstereotyping gender roles with the likes of female firefighters and ninjas, through to fathers equipped with baby carriers. In fact, the whole point of minifigures is they let children create and be anyone they want – male or female, helmet or hair, freckles or glasses, anything.

The LEGO minifigure has starred in a number of Hollywood blockbusters, including THE LEGO MOVIE, THE LEGO BATMAN MOVIE and THE LEGO NINJAGO MOVIE. In 2007,

Did you know that eight different moulds are used for the production of every minifigure? Two sets of these moulds are the same in design but reversed to mould the right and left minifigure arms and legs!

The precision that goes into these moulds is exceptional, and because the original moulds are almost identical to the ones we use today, minifigures from 1978 can be mixed and matched with the more modern characters from today!

However, one thing that has changed is the number of elements each mould can produce and the speed scale of this – for example, the minifigure head mould construction has improved from an initial eight elements per 9,8 sec. to 128 elements per 14.7 sec. today!

Among the hundreds of images LEGO has released today are these of minifigure prototypes which are particularly fascinating, and actually quite scary! 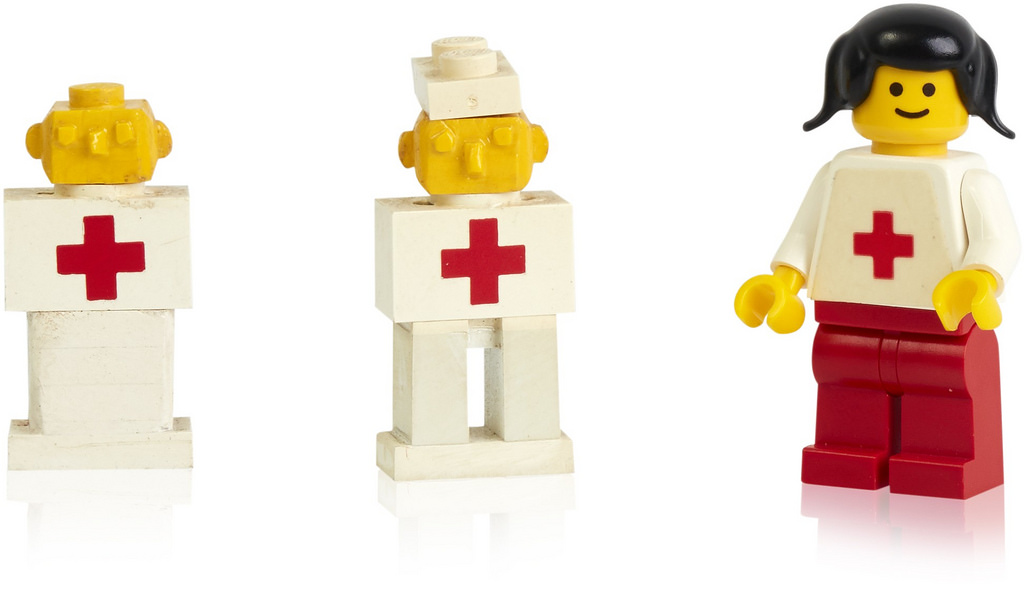 Prototypes, the original figures and those of today: