Your gut is directly connected to your brain, by a newly discovered neuron circuit 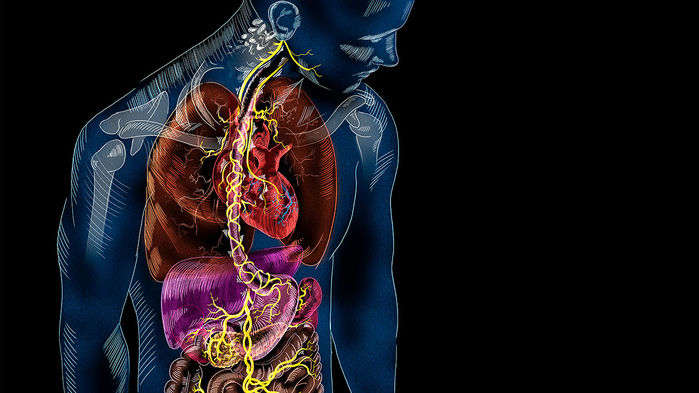 Gut feeling: Sensory neurons inside the gut inform the vagus nerve (yellow) and brain how our stomachs and intestines are doing. Credit: NICOLLE R. FULLER/SCIENCE SOURCE

The human gut is lined with more than 100 million nerve cells—it’s practically a brain unto itself. And indeed, the gut actually talks to the brain, releasing hormones into the bloodstream that, over the course of about 10 minutes, tell us how hungry it is, or that we shouldn’t have eaten an entire pizza. But a new study reveals the gut has a much more direct connection to the brain through a neural circuit that allows it to transmit signals in mere seconds. The findings could lead to new treatments for obesity, eating disorders, and even depression and autism—all of which have been linked to a malfunctioning gut.

The study reveals “a new set of pathways that use gut cells to rapidly communicate with … the brain stem,” says Daniel Drucker, a clinician-scientist who studies gut disorders at the Lunenfeld-Tanenbaum Research Institute in Toronto, Canada, who was not involved with the work. Although many questions remain before the clinical implications become clear, he says, “This is a cool new piece of the puzzle.”

In 2010, neuroscientist Diego Bohórquez of Duke University in Durham, North Carolina, made a startling discovery while looking through his electron microscope. Enteroendocrine cells, which stud the lining of the gut and produce hormones that spur digestion and suppress hunger, had footlike protrusions that resemble the synapses neurons use to communicate with each other. Bohórquez knew the enteroendocrine cells could send hormonal messages to the central nervous system, but he also wondered whether they could “talk” to the brain using electrical signals, the way that neurons do. If so, they would have to send the signals through the vagus nerve, which travels from the gut to the brain stem.

He and colleagues injected a fluorescent rabies virus, which is transmitted through neuronal synapses, into the colons of mice and waited for the enteroendocrine cells and their partners to light up. Those partners turned out to be to vagal neurons, the researchers report today in Science.

In a petri dish, enteroendocrine cells reached out to vagal neurons and formed synaptic connections with each other. The cells even gushed out glutamate, a neurotransmitter involved in smell and taste, which the vagal neurons picked up on within 100 milliseconds—faster than an eyeblink.

That’s much faster than hormones can travel from the gut to the brain through the bloodstream, Bohórquez says. Hormones’ sluggishness may be responsible for the failures of many appetite suppressants that target them, he says. The next step is to study whether this gut-brain signaling provides the brain with important information about the nutrients and caloric value of the food we eat, he says.

There are some obvious advantages to superfast gut-brain signaling, such as detecting toxins and poison, but there may be other perks to sensing the contents of our guts in real time, he says. Whatever those are, there’s a good chance the benefits are ancient—gut sensory cells date back to one of the first multicellular organisms, a flat creature called Trichoplax adhaerens, which arose roughly 600 million years ago.

Additional clues about how gut sensory cells benefit us today lie in a separate study, published today in Cell. Researchers used lasers to stimulate the sensory neurons that innervate the gut in mice, which produced rewarding sensations the rodents worked hard to repeat. The laser stimulation also increased levels of a mood-boosting neurotransmitter called dopamine in the rodents’ brains, the researchers found.

Combined, the two papers help explain why stimulating the vagus nerve with electrical current can treat severe depression in people, says Ivan de Araujo, a neuroscientist at the Icahn School of Medicine at Mount Sinai in New York City, who led the Cell study. The results may also explain why, on a basic level, eating makes us feel good. “Even though these neurons are outside the brain, they perfectly fit the definition of reward neurons” that drive motivation and increase pleasure, he says.