Buttermilk: healthier than it sounds 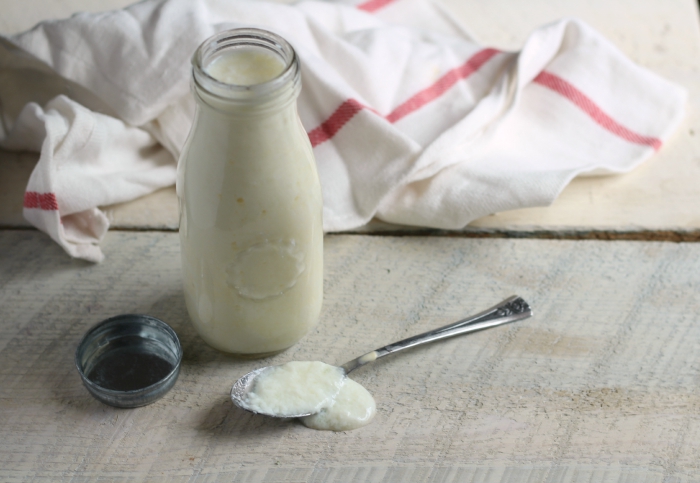 Buttermilk’s name is deceptive since it contains no butter and is typically low in fat. This dairy beverage originated as a byproduct of traditional butter-making, being the protein-rich liquid left behind after all the butter was churned out of fresh dairy cream. As Ed Blonz, Ph.D., a food and nutrition expert and member of our editorial board explains, old-fashioned butter-churning, which used non-pasteurized cream, was not a sterile process: As the lactose (milk sugar) in the cream came in contact with bacteria in the air and in the cream itself, it would be metabolized into lactic acid, giving the fluid its distinctive, tangy taste and increased thickness.

Traditional buttermilk is a staple in India, Nepal, and some other countries. Though a few small dairy farms in the U.S. produce this “real” buttermilk, commercial buttermilk today is made by culturing pasteurized milk—usually low-fat (1%) or fat-free—with lactic-acid-producing bacteria, such as Lactococcus lactis or Lactobacillusbulgaricus (similar to how yogurt is made). This fermented product is called cultured buttermilk.

Low-fat cultured buttermilk has 100 calories, 2 grams of fat, and 8 grams of protein per cup. Like regular milk, it is rich in calcium (285 milligrams), potassium, riboflavin (B2), and other nutrients. A few companies sell “cultured whole buttermilk,” which is higher in calories (150 per cup) and fat (8 grams, 5 grams saturated). Some buttermilk is fortified with vitamins A and D. And some has added thickeners (such as locust bean gum and carrageenan) and a little salt. Labels will indicate if there are “active cultures,” but may not list the specific strains.

The science behind it

Preliminary research suggests that buttermilk may have some heart benefits. In a Canadian study, published in Nutrition, Metabolism & Cardiovascular Diseases in 2013, consumption of reconstituted buttermilk powder (two servings a day, one before breakfast, the other before dinner) for four weeks led to very modest reductions in total blood cholesterol, along with reduced LDL (“bad”) cholesterol in participants with higher LDL to start. This was attributed to components of buttermilk, primarily MFGM (milk fat globule membrane), which may inhibit intestinal cholesterol uptake. Triglycerides also decreased.

Additional results from this study population, published in Nutrition in 2014, reported a concomitant blood-pressure lowering effect from the buttermilk treatment, compared to the placebo dairy beverage that lacked the presumed active MFGM components.

Though these studies had statistically significant results, they are not necessarily clinically relevant. What’s reassuring is that buttermilk did not raise blood cholesterol or blood pressure, as some people may think it would. Other research suggests that MFGM may have antimicrobial and anticancer properties.

What about lactose—does buttermilk have less than regular milk? Due to its culturing, some buttermilk has a lower lactose content and therefore may be better tolerated by people who are lactose-intolerant. But the actual amount of lactose depends on the specific organisms used in fermentation and the duration of the culturing process.

Because of its acidity, buttermilk lasts longer than regular milk. You can use low-fat versions as a healthy substitute for whole milk, butter, cream, or sour cream in recipes, such as for biscuits, pancakes, and cornbread. By softening the gluten in wheat flour, it makes for tender baked goods, with a little tang. Try buttermilk also in smoothies, salad dressings, soups, and meat and poultry marinades. If a recipe calls for buttermilk and you have none on hand, you can make “acidified buttermilk” by combining vinegar or lemon juice with regular milk. Add one tablespoonful of the acid ingredient to one cup of milk; stir and let stand for five minutes.