Someone has taken their love of scary movies one step too far.

A killer known as Ghostface begins killing off teenagers, and as the body count begins rising, one girl and her friends find themselves contemplating the 'rules' of horror films as they find themselves living in a real-life one. 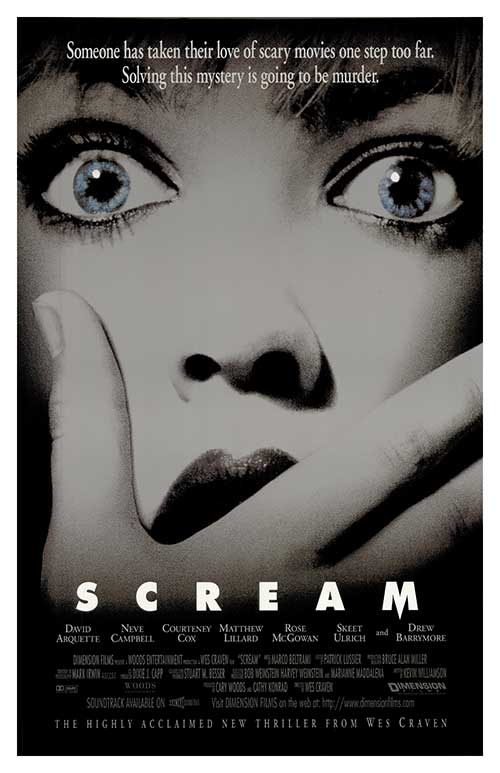 High school student Casey Becker receives a flirtatious phone call from an unknown person, asking her, “What’s your favorite scary movie?” However, the caller turns sadistic and threatens her life. He reveals that her boyfriend Steve Orth is being held hostage and demands she answer questions about horror films. After Casey gets one wrong, Steve is murdered. When Casey refuses to answer more questions, she is murdered by a masked killer. Her parents come home to find her corpse hanging from a tree.

The following day, the news media descend on the town and a police investigation begins. Meanwhile, Sidney Prescott struggles with the impending first anniversary of her mother’s murder by Cotton Weary. While waiting at home for her friend, Tatum Riley, Sidney receives a threatening phone call. After she hangs up she is attacked by the killer, but manages to escape. Sidney’s boyfriend, Billy Loomis, arrives shortly after, but after he drops his cell phone, Sidney suspects him of making the call and flees. Billy is arrested and Sidney spends the night at Tatum’s house.

Stu Macher’s house (pictured in September 2017) where the second half of the movie takes place, near Tomales, California.
Billy is released the next day. Suspicion has shifted to Sidney’s father, Neil Prescott, as the calls have been traced to his phone. School is suspended in the wake of the murders. After the students have left the school, Principal Himbry is stabbed to death in his office. Tatum’s boyfriend, Stu Macher throws a party to celebrate the school’s closure. The party is attended by Sidney, Tatum, their friend Randy Meeks, and multiple other students. Reporter Gale Weathers attends uninvited to cover the situation, as she expects the killer to strike. Tatum’s brother deputy sheriff Dewey Riley also looks out for the murderer at the party. Tatum is killed during the party after having her head crushed by the garage door. Billy arrives to speak to Sidney privately, and the two ultimately consummate their relationship. Dewey and Gale investigate a nearby abandoned car. Many party attendees are drawn away after hearing news of Himbry’s death; Sidney, Billy, Randy, Stu, and Gale’s cameraman Kenny remain.

After having sex, Sidney and Billy are attacked by the killer, who seemingly murders Billy. Sidney narrowly escapes the house and seeks help from Kenny, but the killer slits his throat; Sidney then flees again. Gale and Dewey, having discovered that the car belongs to Neil Prescott, return to the house. They believe Neil is the killer and has come to the party to continue his spree. Gale tries to escape in her van, but drives off the road and crashes to avoid hitting Sidney. Meanwhile, Dewey is stabbed in the back while investigating in the house, and Sidney takes his gun. Stu and Randy appear and accuse each other of being the killer. Sidney retreats into the house, where she finds Billy wounded but still alive. She gives Billy the gun; he lets Randy into the house and shoots him. Billy reveals that he feigned his injuries and is actually the killer; Stu is his accomplice…