Your microbiota may not be on your side as you try improving your diet this New Year’s. In a study published December 29 in Cell Host & Microbe, researchers explore why mice that switch from an unrestricted American diet to a healthy, calorie-restricted, plant-based diet don’t have an immediate response to their new program. They found that certain human gut bacteria need to be lost for a diet plan to be successful.

“If we are to prescribe a diet to improve someone’s health, it’s important that we understand what microbes help control those beneficial effects,” says Jeffrey Gordon, Director of the Center for Genome Sciences and Systems Biology at Washington University in St. Louis and senior author of the paper. “And we’ve found a way to mine the gut microbial communities of different humans to identify the organisms that help promote the effects of a particular diet in ways that might be beneficial.” 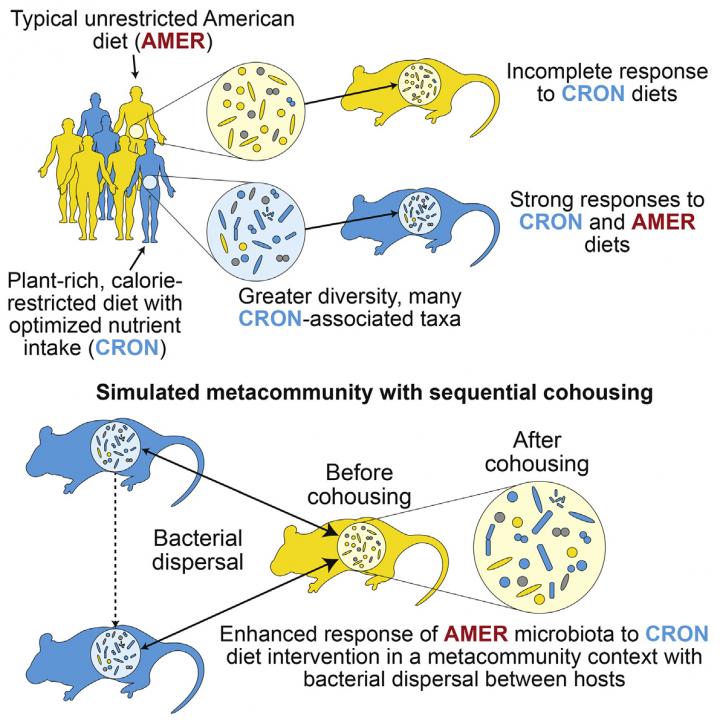 They then colonized groups of germ-free mice with the different human donors’ gut communities and fed the animals the donor’s native diet or the other diet type. Although both groups of mice responded to their new diets, mice with the American diet-conditioned microbiota had a weaker response to the plant-rich diet.

“We need to think of our gut microbial communities not as isolated islands but as parts of an archipelago where bacteria can move from island to island. We call this archipelago a metacommunity,” says first author Nicholas Griffin, an instructor at WUSTL. “Many of these bacteria that migrated into the American diet-conditioned microbiota were initially absent in many people consuming this non-restricted diet.”

Although the scientists are optimistic that their approach will help guide the development of new strategies for improving the effectiveness of prescribing healthy diets, they emphasize that more research is needed to identify the factors that determine the exchange of microbes between people.

“We have an increasing appreciation for how nutritional value and the effects of diets are impacted by a consumer’s microbiota,” says Gordon. “We hope that microbes identified using approaches such as those described in this study may one day be used as next-generation probiotics. Our microbes provide another way of underscoring how we humans are connected we are to one another as members of a larger community.”