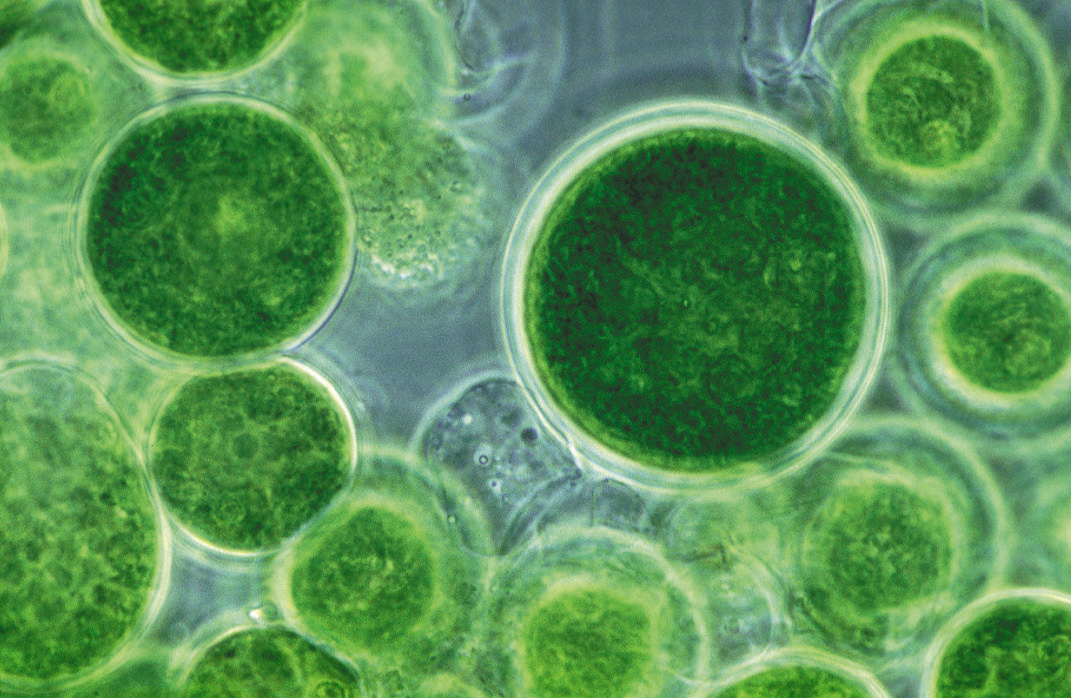 Algae are a vast, diverse group of organisms, among the most ancient life on Earth. They range from single-celled micro-algae to large forms such as seaweed and kelp. Nowadays, micro-algae are marketed as dietary supplements and promoted as “superfoods,” added to lattes, smoothies, and even cookies and chips. The supplements are touted as virtual cure-alls, to improve cardiovascular, gastrointestinal, cognitive, and immunological health; relieve arthritis pain, premenstrual syndrome, and hay fever; and boost energy. They’re even supposed to reduce skin wrinkling and other signs of aging.

One of the best known of these micro-algae is Chlorella, classified as green algae. There’s also Spirulina, which was once classified by biologists as blue-green algae and is still commonly called that, even though blue-green algae are now considered to be a phylum of bacteria, Cyanobacteria. Another popular blue-green algae often marketed as a supplement has the tongue-twisting name Aphanizomenon flos-aquae, or simply AFA.

Naturally present in oceans, lakes, and ponds (where they’re visible as “scum” or algal blooms), micro-algae are an essential part of the food chain, though they are not generally eaten by large aquatic creatures. Do they provide any special nutritional or health benefit to humans?

Micro-algae contain protein, vitamins, minerals, and fiber, but the amounts in supplements usually range from tiny to small. Some chlorella and spirulina supplements do contain good amounts of vitamins C and K and beta carotene, but not more than colorful fruits and vegetables do. They are often promoted as good sources of vitamin B12, but it’s not clear if this is well absorbed from algae. They also contain an array of other interesting compounds, including plant sterols, omega-3 fatty acids (both alpha-linolenic acid, found in some plants, as well as EPA, a type found in fish) along with gamma-linolenic acid, an omega-6 fatty acid that’s often touted for its anti-inflammatory properties. Some fans praise micro-algae for their chlorophyll, a pigment that’s essential for photosynthesis—the ability of plants and algae to convert sunlight into chemical energy (stored as carbohydrates). But there’s no evidence that chlorophyll does anything for the human body.

Chlorella and spirulina are promoted for their antioxidant capacity, like so many other supplements, and as a way to improve blood cholesterol levels. In a small Korean clinical trial in the Nutrition Journal in 2014, for instance, people with mildly elevated cholesterol who took chlorella tablets after every meal for four weeks had small reductions in total cholesterol and triglycerides compared to those taking a placebo—but not enough to justify taking a supplement. Another small Korean study, in Nutrition Research and Practice in 2008, found that older people with diabetes who took spirulina supplements for three months had modest reductions in blood pressure and blood cholesterol. This and other preliminary research does not support the extravagant claims made by marketers of the supplements.

Spirulina, in particular, is also marketed to athletes as a way to improve muscle endurance and decrease exercise-related muscle damage. In a very small Greek study in Medicine & Science in Sports & Exercise in 2010, fit young men who took spirulina capsules three times a day for four weeks were able to run intensely on a treadmill longer than those taking a placebo, and there were improvements in some components of the body’s antioxidant system. Larger clinical trials are needed to confirm these findings.

Concerns and risks of micro-algae

It’s well known that blue-green algae (that is, cyanobacteria) can produce microcystins and other toxins that can contaminate drinking and swimming water and, in large amounts, make people sick and even kill livestock. Although algae products are harvested from controlled ponds, concerns remain about potential contamination with pollutants, including toxic metals, such as mercury. Spirulina products are generally considered safe, based on small studies. Years ago, for instance, Health Canada (the equivalent of the U.S. FDA) tested a broad range of algae supplements and found no toxins in spirulina, though some other blue-green algae products did contain them.

Women who are pregnant or breastfeeding should avoid blue-green algae, because of lack of safety data. So should people with autoimmune diseases, such as lupus or rheumatoid arthritis, and those who taking immunosuppressive medication (since it may stimulate the immune system), as well as people who have a clotting disorder or are taking anti-clotting medication (since it may increase the risk of bleeding).

Chlorella may contain iodine, so anyone who needs to restrict their level of iodine should not consume it.

Bottom line: You don’t need supplements or foods containing micro-algae. More research is needed to determine the benefits (if any) and risks of micro-algae, especially when consumed long term. Even if they are pure and free of toxins, it’s a stretch to think they’ll keep you healthy. There’s no reason to take them for any nutrients they contain, which you can easily get from a healthy diet, notably fruits, vegetables, legumes, and fish. If you want to eat algae, there’s always seaweed.