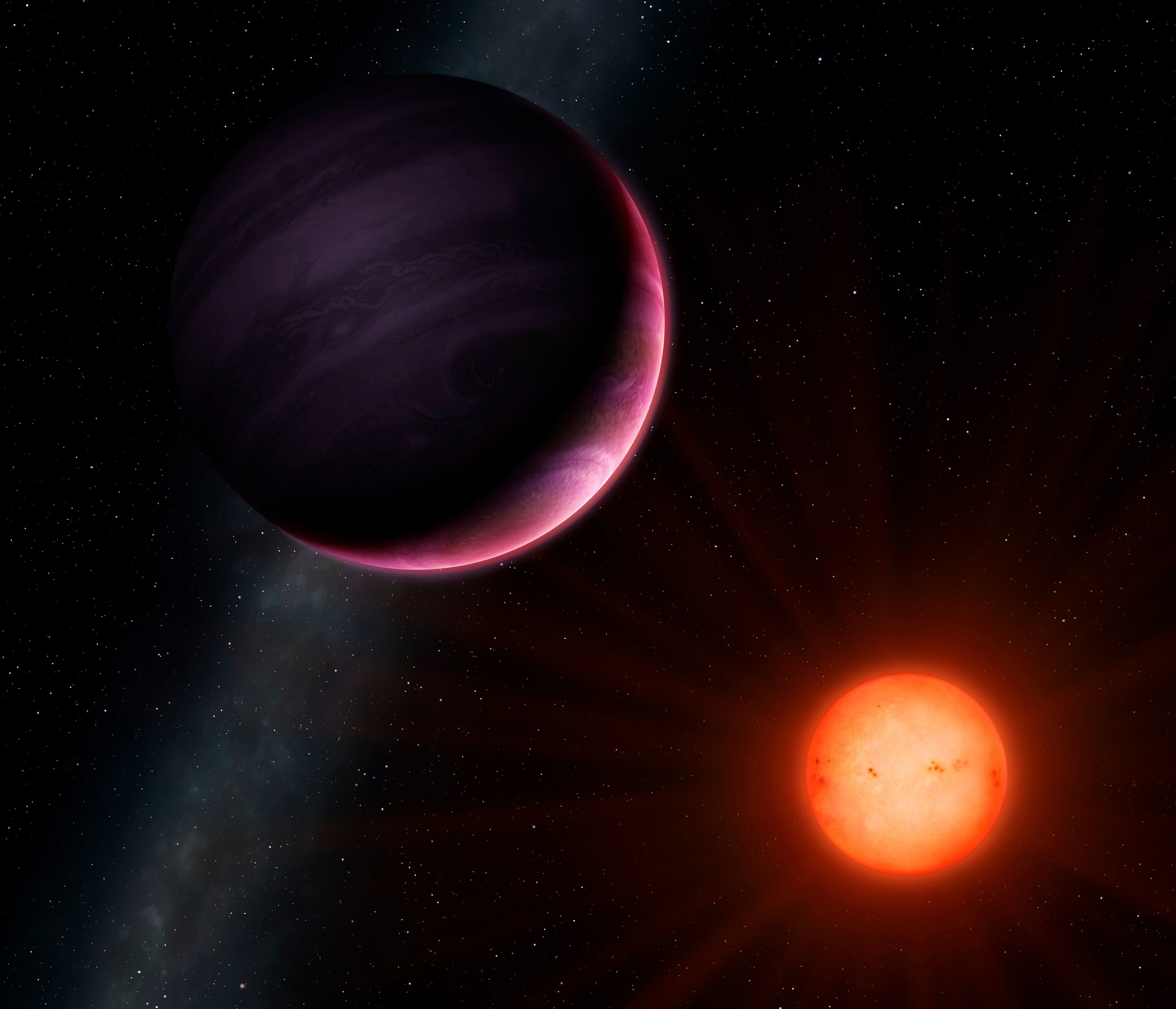 Via: University of Warwick/Mark Garlick

A giant planet, which should not exist according to planet formation theory, has been discovered around a distant star. The new research is presented in a paper recently accepted for publication in the journal Monthly Notices of the Royal Astronomical Society.

The existence of the ‘monster’ planet, NGTS-1b, challenges theories of planet formation which state that a planet of this size could not be formed around such a small star. According to these theories, small stars can readily form rocky planets but do not gather enough material together to form Jupiter-sized planets.

NGTS-1b however, is a gas giant—due to its size and temperature, the planet is known as a ‘hot Jupiter,” a class of planets that are at least as large as our solar system’s very own Jupiter, but with around 20 percent less mass. Unlike Jupiter however, NGTS-1b is very close to its star – just 3 percent of the distance between Earth and the Sun, and completes an orbit every 2.6 days, meaning a year on NGTS-1b lasts two and a half Earth days.

In contrast, the host star is small, with a radius and mass half that of our sun. Professor Peter Wheatley from the University of Warwick commented on the complications this introduced: “Despite being a monster of a planet, NGTS-1b was difficult to find because its parent star is so small and faint.” He went on to explain the significance of the discovery given the challenging circumstances “small stars like this red M-dwarf are actually the most common in the universe, so it is possible that there are many of these giant planets waiting to found.”

NGTS-1b is the first planet to be spotted by The Next-Generation Transit Survey (or “NGTS’) which employs an array of 12 telescopes to scour the sky. The researchers made their discovery by continually monitoring patches of the night sky over many months, and detecting red light from the star with innovative red-sensitive cameras. They noticed dips in the light from the star every 2.6 days, implying that a planet was orbiting and periodically blocking the starlight.

Using these data, they then tracked the planet’s orbit and calculated the size, position and mass of NGTS-1b by measuring the radial velocity of the star. In fact, this method, measuring how much the star ‘wobbles’ due to the gravitational tug from the planet, was the best way of measuring NGTS-1b’s size.

Dr Daniel Bayliss, lead author of the study, also from the University of Warwick, commented “The discovery of NGTS-1b was a complete surprise to us—such massive planets were not thought to exist around such small stars – importantly, our challenge now is to find out how common these types of planets are in the Galaxy, and with the new Next-Generation Transit Survey facility we are well-placed to do just that.”

NGTS is situated at the European Southern Observatory’s Paranal Observatory in the heart of the Atacama Desert, Chile, but is one of very few facilities to be run by external parties—UK Universities Warwick, Leicester, Cambridge, and Queen’s University Belfast are involved, together with Observatoire de Genève, DLR Berlin and Universidad de Chile.

Professor Peter Wheatley leads NGTS, and was pleased to see these exciting results: “Having worked for almost a decade to develop the NGTS telescope array, it is thrilling to see it picking out new and unexpected types of planets. I’m looking forward to seeing what other kinds of exciting new planets we can turn up.”