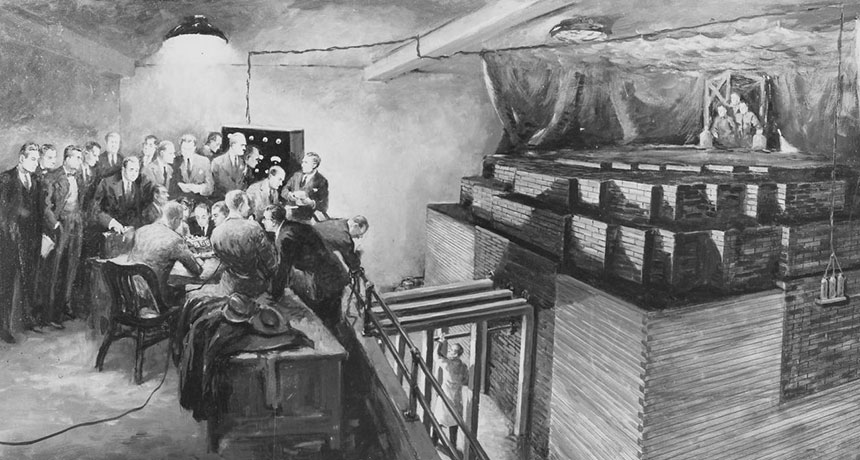 Via: NATIONAL ARCHIVES AND RECORDS ADMINISTRATION

Some scientific anniversaries celebrate events so momentous that they capture the attention of many nonscientists as well — or even the entire world.

Among the immigrants who initiated the American fission effort was Albert Einstein. His letter to President Franklin Roosevelt, composed at the request and with the aid of immigrant Leo Szilard from Hungary, warned of nuclear fission’s explosive potential. Presented with Einstein’s letter in October 1939, Roosevelt launched what soon became the Manhattan Project, which eventually produced the atomic bomb. It was another immigrant, Enrico Fermi from Italy, who led the initial efforts to show that building an atomic bomb was possible.

Fermi had arrived in the United States in January 1939, shortly after receiving the Nobel Prize in physics for his work on creating artificial elements heavier than uranium. Except that he hadn’t actually done so — his “new elements” were actually familiar elements produced by the splitting of the uranium nucleus. But nobody knew that fission was possible, so Fermi had misinterpreted his results. Chemists Otto Hahn and Fritz Strassmann, working in Germany, conducted experiments in 1938 that produced the element barium by bombarding uranium with neutrons. So Hahn and Strassmann got the credit for discovering fission, although they didn’t really know what they had done either. It was Lise Meitner, a former collaborator of Hahn’s who had recently left Germany to avoid Nazi anti-Semitism, who figured out that they had split the uranium nucleus.

Meitner’s nephew Otto Frisch revealed her insight to Niels Bohr, the world’s leading atomic physicist, just as he stepped aboard a ship for a visit to America. Upon arriving in the United States, Bohr informed Fermi and Princeton University physicist John Archibald Wheeler of Hahn’s experiment and Meitner’s explanation. Fermi immediately began further experimental work at Columbia University to investigate fission, as did Szilard, also at Columbia (and others in Europe); Bohr and Wheeler tackled the issue from the theoretical side.

Fermi and Szilard quickly succeeded in showing that a fission “chain reaction” was in principle possible: Neutrons emitted from fissioning uranium nuclei could induce more fission. By September, Bohr and Wheeler had produced a thorough theoretical analysis, explaining the physics underlying the fission process and identifying which isotope of uranium fissioned most readily. It was clear that the initial speculations about fission’s potential power had not been exaggerated.

“Almost immediately it occurred to many people around the world that this could be used to make power and that it could be used for nuclear explosives,” another immigrant who worked on the Manhattan Project, the German physicist Hans Bethe, told me during an interview in 1997. “Lots of people verified that indeed when uranium is bombarded by neutrons, slow neutrons in particular, a process occurs which releases tremendous amounts of energy.”

Bethe, working at Cornell University, did not immediately join the fission project — he thought building a bomb would take too long to matter for World War II. “I thought this had nothing to do with the war,” he said. “So I instead went into radar.”

Fermi, despite being an immigrant, was put in charge of constructing an “atomic pile” (nowadays nuclear reactor) to verify the chain reaction theory. He was, after all, widely acknowledged as the world’s leading nuclear experimentalist (and was no slouch as a theorist either); colleagues referred to him as “The Pope” because of his supposed infallibility. Construction of the pile began on a squash court under the stands of the University of Chicago’s football stadium. The goal was to demonstrate the ability to generate a chain reaction, in which any one fissioning nucleus would emit enough neutrons to trigger even more nuclei to fission.

“It became clear to Fermi almost immediately that in order to do this with natural uranium you had to slow down the neutrons,” Bethe said.

Fermi decided that the best material for slowing neutrons was graphite, the form of carbon commonly used as pencil lead. But in preliminary tests the graphite did not do the job as Fermi had anticipated. He reasoned that the graphite contained too many impurities to work effectively. So Szilard began searching for a company that could produce ultrapure graphite. He found one, Bethe recalled, that happily agreed to meet Fermi’s purity requirements — for double the usual graphite price.

Ultimately Fermi’s atomic pile succeeded, producing a sustained chain reaction on December 2, 1942. That success led to the establishment of the secret laboratory in Los Alamos, N.M., where physicists built the bombs that brought World War II to an end in 1945.

By then, Bethe had been persuaded to join the project. He arrived at Los Alamos in April 1943 and witnessed the first nuclear explosion, at Alamogordo, N.M., on July 16, 1945.

“I was among the people who looked at it from a 20-mile distance,” he said. “It was impressive.”

Historians frequently cite the report of J. Robert Oppenheimer, director of the Los Alamos project, who said that the explosion reminded him of a line from the Hindu Bhagavad Gita: “Now I am become Death, the destroyer of worlds.”

Bethe recalled a different response, from one of the military officials on the scene.

“One of the officers at the explosion said, ‘My god. Those longhairs have let it get away from them.’”