The engineering of the drinking bird

While most references credit Dr. Miles V. Sullivan as the inventor of the drinking bird because he patented it in 1946, the idea of using heat-driven oscillating liquids to repeatedly tip small mechanisms has been around for well over a century. The concept made its first appearance as a toy from China named the Insatiable Birdie between 1910 to 1930. Still earlier examples of the basic concept can be found in the A. and A. Iske brothers’ 1881 patent for a circular heat engine that used the same principle to make a wheel rotate… 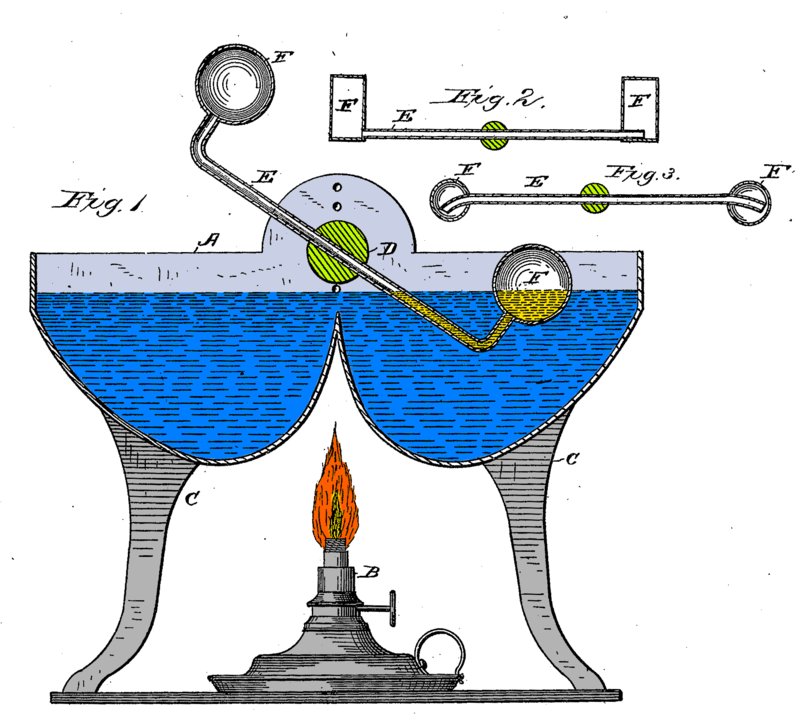 In 1881 Israel L. Landis got a patent for a similar oscillating motor. A year later, the Iske brothers got a patent for a similar motor. Unlike the drinking bird, the lower tank was heated and the upper tank just air-cooled in this engine. Other than that, it used the same principle. The Iske brothers during that time got various patents on a related engine which is now known as Minto wheel. Via: wikimedia.org

The drinking bird has been used in many fictional contexts to automatically press buttons. In The Simpsons episode “King-Size Homer“, Homer used one to repeatedly press a key on a computer keyboard. Herb Powell also showed one to Homer as part of a demonstration regarding inventions in the episode “Brother, Can You Spare Two Dimes?” Two of them were used in the 1990 film Darkman to set off explosions. Drinking birds have appeared as part of a Rube Goldberg machine in the film Pee-wee’s Big Adventure.