The burning truth about e-cigarettes 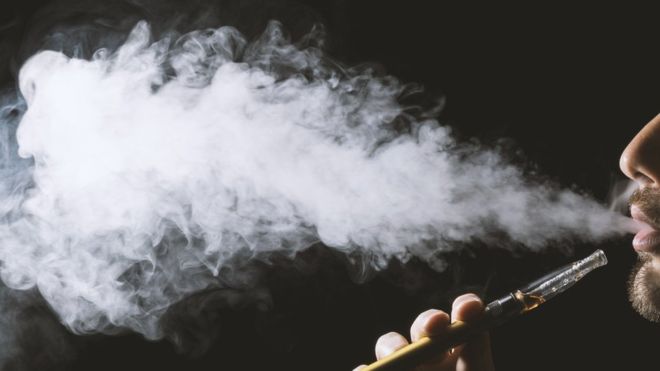 The widespread use among teenagers of stylish e-cigarettes that can be charged in a USB drive has made headlines lately. Many young people do not even realize they are inhaling nicotine through the devices, or that a growing body of research is finding that “vaping,” as the practice is called, is bad for their health and often a gateway to starting to smoke cigarettes.

And it isn’t just kids who are confused about vaping; adults are too. Mixed messages abound, with proponents continuing to promote e-cigarettes as a healthier alternative to tobacco cigarettes that may help current smokers to smoke less or even quit entirely. But the data show that e-cigs have the opposite effect for most people; smokers who use e-cigarettes are less likely to stop smoking cigarettes, compared with those who don’t use e-cigs. Even so, some argue that the potential benefits of vaping to help smokers quit outweigh the risks of addicting youth to nicotine.

To get this straightened out, we reached out to tobacco and e-cigarette expert Stanton Glantz, PhD, director of the Center for Tobacco Control Research and Education at the University of California, San Francisco. Glantz has authored hundreds of papers on tobacco and e-cigarettes and traveled widely to lecture on tobacco control. Initially agnostic about e-cigarettes, he has become a staunch opponent of them in light of his and other researchers’ findings on their health risks and, more important, how they are expanding the tobacco epidemic—both by attracting young people and by making it harder for current smokers to quit.

Could you start by describing how e-cigarettes and vaping are different than smoking tobacco cigarettes?

The way a tobacco cigarette works, or for that matter a marijuana joint, is when you burn the tobacco it generates an aerosol of ultrafine particles that carries the nicotine deep into your lungs, where it is rapidly absorbed and travels to your heart and to your brain in a matter of seconds.

An e-cigarette also generates an aerosol of ultrafine particles to carry the nicotine deep into your lungs, but it works by using a battery to heat a coil that’s wrapped around a wick soaked in a nicotine-containing liquid. E-cigarettes do not generate the combustion products that cigarettes do, but the ultrafine particles are themselves dangerous, as is the nicotine. People who use e-cigarettes do inhale cancer-causing chemicals, though the levels of exposure are lower than with regular cigarettes. One example is formaldehyde, which is generated by heating the e-liquid. Many of the flavoring agents are also dangerous when inhaled. E-cigarettes also give off fine metal particles, some of which are carcinogenic.

It’s important to note that cancer isn’t the only risk of smoking. Many more smokers die from heart disease, vascular disease, and lung disease than from cancer. In terms of those end points, e-cigarettes are looking just as bad as or worse than conventional cigarettes.

That is very interesting. Are these recent discoveries?

Can you talk more about the health risks that the latest research is uncovering?

Consistent with this biological effect, we presented a paper (now in press) at the Society for Research on Tobacco and Nicotine in which we reported that people who used e-cigarettes daily were almost twice as likely to have a heart attack compared to people who did not use e-cigarettes. It’s an observational study, which is descriptive only and can’t be used to prove causation, so you’ve got to be careful about using the “cause” word. But the risk increases were substantial—approaching those of cigarettes.

In terms of lung disease, animal studies have suggested that e-cigarettes trigger inflammatory processes in the lungs and inhibit the normal immune protections that the lungs use to keep stuff out of the body. Those effects seem bigger than you would see with a conventional cigarette. Several observational studies in humans, including one presented recently at the American Thoracic Society, have shown an association between e-cigarette use and COPD, even when controlling for cigarette smoking and exposure to secondhand smoke.

Do we have any idea how many people are using e-cigarettes compared to tobacco cigarettes?

Even if they don’t progress to cigarettes, e-cigarettes are dangerous for kids. The nicotine permanently changes their developing brain. And the younger kids start, the more likely they are to suffer long-term addiction to nicotine.

What do you think of the argument that the benefits of vaping to help people quit smoking outweigh the risk of some young people moving from e-cigarettes to smoking?

Are people becoming dual users because they think that e-cigarettes are healthier and will help them quit smoking?

If you look at the different surveys that have been done, those are two of the leading reasons why adults use e-cigarettes. Using e-cigarettes in places where people are not allowed to smoke is another important reason, but that is becoming less and less true as more places—including the whole state of California—prohibit the use of e-cigarettes in places that you can’t smoke cigarettes. Sometimes quitting is first, sometimes the belief that they are healthier is first. But it’s a scam either way. Because for most people, e-cigarettes make it harder to quit smoking. So here you have people who want to quit smoking and take up e-cigarettes and it actually makes it harder for them to accomplish what they are trying to do.

In terms of safer, the more we learn, the worse they look. And the effects of dual use are looking to be worse than those of conventional cigarettes alone.

Do we know what motivates kids to take up vaping?

Yeah, they use e-cigarettes because they think they are safe. They will use them because they think that they are inhaling harmless water vapor, which is absolutely not true. The liquid is usually a mixture of propylene glycol, glycerin, flavors, and nicotine, the addictive drug in tobacco.

Kids often think that they are rebelling against the big cigarette companies when they use e-cigarettes, but they don’t realize that a lot of them are made by the big cigarette companies. They are just marketed under different brand names, making them sound like they’re from separate companies. Kids use them because of the flavors, like apple juice, vanilla caramel swirl, and whipped cream. These flavors are a huge factor in kids using them.

It seems like there is a lot of misinformation out there about e-cigarettes. Why do you think that is?

It is mainly because of marketing by the tobacco interests and the e-cigarette interests. In addition, the health community was slow to engage the e-cigarette issue and allowed the market to get established before they began pushing back. But here in California, the state is doing a great job now. The California Department of Public Health just launched a campaign about how flavors hook kids on nicotine, for example.

In one of your talks, you said that smoking tobacco is so bad for you that when you light up it’s basically like hanging out next to a “little toxic waste dump on fire.” Do you have an equivalent comparison for e-cigs?

E-cigarettes are not on fire. So, it’s more like sitting next to a really hot boiling toxic waste dump.

Let’s talk about cannabis. With more and more states approving recreational marijuana, what role will e-cigarettes play and what should we be looking out for?

No one that I know has studied the vaping of marijuana or these leaf vaporizers that are now on the market. But the aerosol of ultrafine particles that a marijuana cigarette or other marijuana smoking device generates are likely to have the same effects as those generated by cigarettes or e-cigarettes. Indeed, there is already one animal study showing that secondhand marijuana smoke has the same bad effects on arteries as tobacco cigarettes, and the effect lasts longer. This process in and of itself is dangerous. Breathing hot foreign chemicals into your body isn’t a good idea.