Nowadays, streaming services such as Amazon Prime, Hulu, and Netflix have their own Christmas movies for people to watch – and some of them are actually quite good. But, with families traveling, watching new movies in theaters, and getting together for gift-giving, there’s only so much time to watch actual Christmas movies.

screenrant.com gathered up the best Christmas movies of all time; that way people can avoid spending their time watching the not-so-great Christmas movies and only dive into the classics, the breakout hits, and the ones that have perhaps gone unnoticed over the years.

Michael Dougherty’s Krampus follows a standard routine – child in a dysfunctional-but-loving family begins to lose his belief in Santa Clause, and something special happens to re-ignite the flame. Except here it’s not good ol’ Saint Nick that visits young Max, but Krampus, the anti-Santa of European folklore who punishes those who’ve misbehaved and lost their way.

Dougherty’s horror-comedy is an acerbic take on a festive standard. Relying on practical effects – the Krampus itself is an actor (Luke Hawker) in a suit – Krampus is a demonic festive romp for those with a cynical side. With a cast that includes Adam Scott, Toni Collette, and David Koechner, the regular laughs and well-timed scares make this the best festive offering of recent years.

Home Alone represents every parents worst nightmare over the holiday period. What starts as a dream for black sheep Kevin McAllister, as he’s incidentally left behind by his family when they take off for Christmas vacation, soon becomes a fight for his life against a pair of hapless house burglars.

A hit upon release in 1990 and a staple to this day, Home Alone is the kind of festive regular movie that can be hard to avoid due to routine airing on TV over the period. For good reason, though, as the slapstick third act where Joe Pesci and Daniel Stern are tormented by all manner of improvised traps – involving paint cans and toy cars and whatever Kevin can find – is still a crowd-pleaser, even if it feels like a prequel to the Saw franchise at times.

Die Hard is an all-time great action film set at Christmas. That does not inherently make it a Christmas movie, but that hasn’t stopped people making it an indelible viewing tradition. For many, it isn’t Christmas until they’ve seen Hans Gruber falling to his death from the Nakatomi Plaza.

There’s no debating the quality of John McTiernan’s genre masterpiece. It’s a clever, sweaty, bloody, explosive tale of one-against-all as Bruce Willis’ John McClane holds the line against a troupe of tough, efficient German terrorists. Every second line is quotable and every action scene is triumphant. Weighed up as a Christmas film, however? There’s just not enough beyond a few well-decorated trees and some convenient timing for it to be a top contender.

The exact kind of weird feature you’d expect from Bill Murray in his hey-day being directed by Richard Donner, of Superman and Lethal Weapon fame. Perhaps the darkest take on Charles Dickens’ A Christmas Carol (that isn’t just a straight adaptation), Scrooged is a delightfully strange, occasionally sadistic rejig of the literary classic.

Frank Cross (Murray) is Scrooge, a ruthless TV executive being punished for overworking his staff to produce a lavish performance of A Christmas Carolduring the holidays. Over the course of his three ghostly visits, Cross sees the darkness of his legacy; the homeless man he shunned now frozen to death and his personal assistant’s child now institutionalized. The movie is a cult favorite for its decidedly more “grown up” delivery, playing with the fourth wall and poking fun at the whole idea of a Christmas film. The effects are great, too, the expensive at-time-time make-up and design creating some of the most chilling imagery to be found in any Christmas movie.

Before Will Ferrell was Ron Burgundy, he was Buddy the Elf, a human raised among Santa’s elves as one of their own. Festive joy incarnate, Buddy cannot live knowing his biological father is on the naughty list, and sets out to convince him to change his ways and get off the naughty list.

It’s hard to imagine anyone, anywhere, creating a more obnoxiously Christmas-y movie than Elf, and that’s largely because there’s few better at being obnoxious than Will Ferrell. Hyper-actively kinetic and operating above-room-volume at all times, Elf is the film for anyone who starts counting the days to Christmas in September and have their presents bought one week into December. 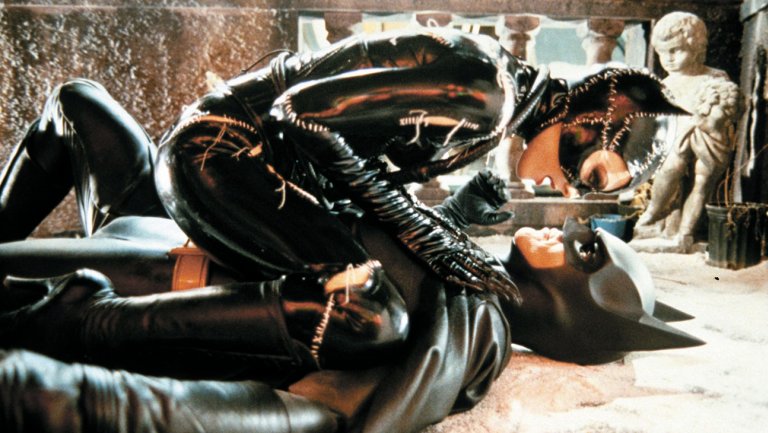 Not everyone who dislikes Christmas does so because they’re a Scrooge. As much as it’s a time of coming together and thankfulness, it can also bring immense heart-ache, reminding us of those who aren’t here anymore and shoddy circumstances. Batman Returns is a circus of misery for the ones that just want to get through Christmas and into January like nothing happened.

Nobody has a good time in Tim Burton’s Batman sequel. A cirque-de-soleil of deception, anguish, and despondency, Batman is forced to work during the holidays to stop the Penguin from killing Gotham’s first-born sons, Max Shreck from monopolizing Gotham’s power supply, and Catwoman from getting revenge on Shreck for trying to kill her. Moody and eccentric, Burton’s second Batman film is one of the best superhero sequels and, if you can see beyond the costumes, a great meditation on the struggle for those who don’t really get to have Christmas.

Though bigger in the U.S. than elsewhere – where an entire channel shows the film on loop over the holidays – A Christmas Story is just a great, well, Christmas story. An adult Ralphie Parker narrates a set of vignettes of his childhood, centering around one Christmas, when he was nine years old, in which his dad surprised him with a Red Ryder Carbine Action 200-shot Range Model Air Rifle – his most-coveted present.

While the base story of Ralph being bullied in school but then getting the present he so desires as told by his older self is powerful enough with nostalgia, it’s the broader family portrait that makes the movie what it is. The Parkers aren’t a rich family and their home-life isn’t perfect, but they’re together, and it’s the quiet moments where we see them as a unit that the real beauty of the movie, and its namesake period, shine through.

The drama inherent to “a man stands trial for believing he’s Santa Clause” can be very different depending on your age, but by the end here, we’re all on Kris Kringle’s side, wanting the world to let this kind man be and let him and the children believe what they want.

Miracle On 34th Street is a movie that’s always verging on being indifferent to the mountains of TV movies Hallmark have produced for the festive period. But it remains a cut above because of the genuine commitment to the notion of putting a belief in Santa Clause on trial. The court-room scenes are biting and the Walker family discourse feels legitimate. If you want to convince someone in your life of the festive spirit, few are better to take the stand than Natalie Woods’ Susan and Edmund Gwenn’s Kris Kringle.

The true Christmas epic. It’s A Wonderful Life strikes at the heart of something we all need reminding of every once in a while – you matter. The world would be a lesser place if you never existed, and the people in your life would not be for the better.

The long, winding tale of George Bailey’s success and subsequent downfall is not an easy watch by any stretch, but it’s the tacit dedication to showing that good and bad happen to all of us that makes the movie what it is. There are moments, no matter how talented, dedicated, or well-to-do you are, where everything collapses and it all goes wrong. That’s life, and unfortunately there’s no angels around that’ll stop you doing something you can’t take back in the face of defeat. Instead we have this movie, with its affirmation that there is always hope.

Everything is better with the Muppets, and a Christmas film based on the classic Christmas text is as good as it gets. From the opening number “Scrooge” through to the Kermit-led “One More Sleep ’til Christmas” to the Ghost of Christmas Present’s rousing “It Feels Like Christmas” and the forever heartbreaking “Bless Us All,” The Muppet Christmas Carol is a simple delight in the way only Jim Henson’s wondrous ensemble are capable of.

The book, a dreary novel, is redone as an all-ages adventure that extols the virtues of companionship, charity, and caring for your fellow man. Gonzo and Rizzo are a comedy-duo for the ages as the narrators, the former playing Charles Dickens himself, and Kermit, Miss Piggy, and the rest play their parts perfectly, all dressed period-appropriate and bringing that sublime mix of cartoon and dramatic chops the Muppets are known for. Michael Caine is having the time of his life as Ebenezer Scrooge, somehow holding character as the ill-tempered miser no matter the zaniness that surrounds him. A work of genius on every level and the greatest Christmas film ever made.