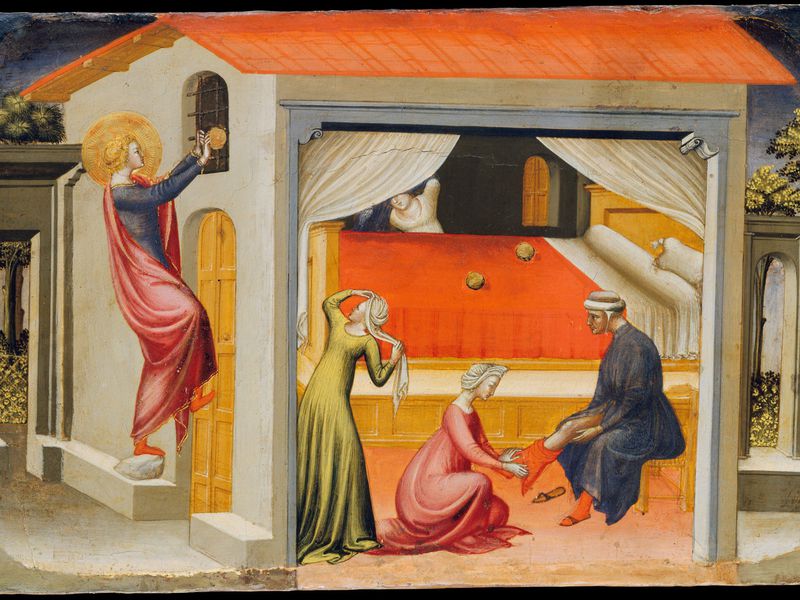 Saint Nicholas, Bishop of Myra, is shown throwing three balls of gold through a window, providing the dowry of three poverty-stricken maidens in an altarpiece painted between 1433 and 1435 for a monastery in Florence. The design was based on an altarpiece by Gentile da Fabriano of 1425. (Public Domain CC0 1.0/Gift of Coudert Brothers, 1888)

The orange became part of Christmastime tradition in the 19th century, in concert with the rise of hanging stockings near the fire. According to Emily Spivack, who wrote about the origin of the Christmas stocking for Smithsonian.com, the tradition of hanging holiday hosiery dates back to at least 1823, when it is mentioned in the classic poem “Account of a Visit from St. Nicholas,” later known as “The Night Before Christmas,” which notes that Santa Claus “fill’d all the stockings” before exiting stage left via chimney.

Placing an orange in the toe of one of these Christmas stockings may have had something to do with the legend of the three balls (or bags or bars or coins) of gold that the Bishop of Myra, the real Saint Nicholas, gave to three poor maidens to use as dowries. Saint Nicholas, who was born at the end of the 3rd century—and whose life is amalgamized with another Saint Nicholas, who lived in Sion in the 6th century, according to some digging by Maria Alessia Rossi, a Kress postdoctoral researcher at Princeton University—is said to have saved the three impoverished women from being sold into slavery with the gold.

According to some tellings of the story, Saint Nicholas threw the gold bags into their house through a window in the dead of night, and one ever-so-conveniently landed in a stocking drying by the fire. “From this legendary incident the custom grew for the older members of the family secretly to place gifts in shoes, stockings or some kind of receptacle for the children, who, finding them on the following morning, were quite willing to give St. Nicholas the credit,” according to a journal article by William Porter Kellam published in the Georgia Review.

That custom also may have birthed the reason people started putting an orange—a much more affordable alternative to gold—in the toe of the stocking—a budget-friendly nod to the so-called “Miracle of the Dowries.”

At the emergence of the Christmas stocking tradition, there was still something very exotic about the gift of the citrus fruit in wintry Europe, which speaks to another theory as to why the orange ended up embedded into the story of Christmas.

“At the end of the nineteenth century in Europe, when the custom of gift giving for Christmas had spread, the orange was a rare and expensive fruit,” explains journalist Dominique Foufelle in The Little Book of Christmas. The fruit was a special treat if you didn’t come from a family of means, and was likely purchased from merchants who brought the citrus from places like Valencia, Spain, or Ivrea, Italy. “Oranges became a luxury for families of modest means who reserved them as a gift for their children,” Foufelle concludes.

It was during the Victorian era that the concept of Christmas was also transforming from a purely religious celebration to one dominated by gifts. As Lorraine Boissoneault charts for Smithsonian.com, “Several forces in conjunction transformed it into the commercial fête that we celebrate today.” One of these factors was the Industrial Revolution, which led to a new surplus of goods and products that advertisers were now tasked to sell to a flush new class of consumers.

The orange in the Christmas stocking may not have been a tradition born in the marketing department, but it certainly didn’t hurt that oranges were being aggressively sold to the public come the early 1900s. Citrus scholarship has actually traced the origins of the mass marketing of oranges to 1908 when the California Fruit Growers Exchange began a massive sales campaign for its Sunkist label. “[N]early 1,500 Manhattan retail stores and soda fountains had bright orange advertisements plastered in their windows. At Christmas, a cartoon Santa Claus offered an orange as the “most healthful gift,” writes Tom Zoellner in a piece about the orange industrial complex for the Los Angeles Review of Books.

The California Citrograph, a monthly publication “devoted to the interests of the citrus industry and to the promotion of subtropical agriculture,” unsurprisingly, embraced the Christmas orange tradition with gusto as part of its sales pitch (though advertisers also took pains to clarify that oranges should be enjoyed year-round as well). In one January 1921 dispatch from the Citrograph, the editor opined, “’A Christmas orange for the toe of every Christmas stocking’ is a wish that the Exchange would like to see fulfilled this year.” The article went as far as to suggest that the “Christmas stocking is really not properly filled without an orange in it,” and, in fact, “it is wise Santa Claus who gives this fruit to his small believers rather than filling their stockings with cheap, artificially colored and oftentimes injurious candy.” The hard sell may sound hokey today, but the gist of the advertising rang true throughout the early 20th century—especially when the Great Depression hit.

As U.S. households tightened their belts, the orange was seen as an affordable luxury and played an important role in the Depression-era stocking. Considered the “fruit of the Great Depression,” according to the Cleveland Plain Dealer, the special treat became a ubiquitous accompaniment of the Christmas stocking. “An orange was a big thing because you couldn’t afford one during the year,” as Richard Grondin, 85, of Medina, Ohio, told the paper in 2008.

For those who couldn’t get their hands on it even during Christmas time, the appeal of the orange became even more heightened. According to historian Douglas Cazaux Sackman’s book Orange Empire: California and the Fruits of Eden, the scarcity of oranges in places like Oklahoma during the Great Depression led to a folk song that “spoke of Santa Claus and oranges in the same breath, wondering if they were real.”

In today’s day and age, where you can pay to have a chunk of glacial ice flown in from Alaska just to chill your cocktail, the appeal of the gift of a fresh orange might not seem so special. In a tongue-in-cheek note to Santa in 2011 published in the New York Times, a writer recounted his disappointment with finding an orange in his stocking as a child. “For Christmas?” he asked. “Did you think we didn’t notice that the white glass bowl in the kitchen was filled with fruits that looked exactly like the ones in our stockings?”

But such naysayers should look back at history. In Perfume, Postcards, and Promises: The Orange in Art and Industry, art historian and critic Helen L. Kohen beautifully charts the story of the orange. Part of the appeal of the fruit, she writes, might be its mystery. Citrus experts have yet to identify where, exactly, citron, the progenitor of modern citrus came from, though northeast India seems the most likely candidate. The orange has been linked throughout history to luxury goods, and it was something Europeans lusted after before they had even cultivated an edible version of the fruit.

Today, Kohen writes, “[t]he orange still means something philosophically.” But just as the citrus business has changed dramatically in the past century, the idea of the orange has also germinated, today falling “into the preserve of nostalgia.”